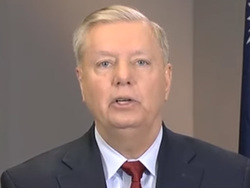 Sen. Lindsey Graham, chairman of the Senate Judiciary Committee, joined FNC’s Maria Bartiromo this week on “Sunday Morning Futures” to discuss Attorney General Bill Barr’s statement that he believes “spying did occur” on the 2016 Trump campaign and transition team and the next steps for his investigation into what happened.

“Democrats, if you’re trying to get Trump, they really don’t care how you’re trying to get him,” Graham said. “I really do care about the rule of law. Most Democrats don’t care about this because they thought it was a worthy endeavor to try to take Trump down, so I’m hoping some Democrats will change their tune, because if you can do this to a Republican, one day you can do it to a Democrat.”

“You know they accuse Trump of changing all the rules in Washington. I would suggest that all the rules have been changed to get Trump,” he continued. “They’re attacking Bill Barr now one of the most seasoned, highly-respected legal minds in the United States. Nothing has changed about Bill Barr since he was attorney general under Bush 41. The only thing that’s changed is the desire to get Trump.”

MARIA BARTIROMO, FOX NEWS: That was Attorney General William Barr last week saying he believed biased members of the FBI did, in fact, authorize spying on the Trump campaign during the run-up to the 2016 presidential election. All of a sudden Democrats now calling it a “right-wing conspiracy.” They are saying they are stunned and this is scary. I don’t know what all of the “stunned” comments are about, plenty of Republicans going back over a year on this program, have said the same exact thing. Watch.

REP. DARREL ISSA, 13 MAY 2018: Maria, I think the important thing is it is very clear that we are being asked to trust the Department of Justice, who we know did, in fact, use a law that a laws them to spy, but lied to get the warrants, lied to a federal judge under the FISA Act, so this is one of the challenges. Make no bones about it, a FISA warrant is, in fact, a license to spy, and now the question is, did you lie, cheat, or steal, in order to do that.

MARIA BARTIROMO, 19 AUGUST 2018: Let’s talk about Bruce Ohr. Why he is at the center of this situation now, and in your target, you’re going to be leading the questioning. What do you want to hear from Bruce Ohr?

REP. JOHN RATCLIFFE, 19 AUGUST 2018: So remember, Maria, how bad it was when we all found out there was this unverified dossier used as the basis to gain a warrant to surveil someone associated with the trump campaign, carter page, and it got worse when we found out that that dossier was paid for by Hillary Clinton and the DNC, but little did we know that some of that money that Hillary Clinton and the DNC used to pay for the dossier, ultimately ended up in the account of the number four person at the Department of Justice, Bruce Ohr, and his wife, Nellie Ohr, who was retained and paid by Fusion GPS to work with Christopher Steele to help create that dossier. So next week, I’m going to sit down with some of my colleagues with Mr. Ohr and give him an opportunity to explain exactly how that came to pass and more importantly who at the Department of Justice authorized it.

REP. JIM JORDAN, 3 FEBRUARY 2019: So those three key facts, Fusion GPS connected with the Clinton campaign, his wife Nellie Ohr works for Fusion GPS and Christopher Steele, the guy who wrote the dossier, has a deep bias against the president. Bruce Ohr communicated that with the FBI, and also, with the Department of Justice specifically Andrew Weissman, who is on Mueller’s team. And the most important fact, Maria, is that he communicated those key pieces of information to the FBI and the DOJ prior to the election, more importantly, prior to when the FBI and the Department of Justice went to the FISA court to get the warrant to spy on Trump’s campaign. That is huge.

MARIA BARTIROMO: And there you go. We’re back now with Senate Judiciary Chairman Lindsey Graham, and Mr. Chairman let me ask you about what Barr said this week. “There was spying on the campaign.” Where does this go now?

SEN. LINDSEY GRAHAM: Well, we’re going to find out whether or not there was legal authority to get a FISA warrant against Carter Page, who was associated with the Trump campaign. By definition the Foreign Intelligence Surveillance Act allows our government to spy on people we think are working with foreign governments. The question was, was there any legitimate reason to believe that? If the warrant was issued on the dossier that’s a bunch of garbage, the answer would be no. Most importantly how could a counterintelligence investigation be opened up against the Trump campaign, Congress never heard about it, was there a legitimate reason to open up a counterintelligence investigation against the Trump campaign, which is spying, and why was President Trump never informed of the fact that people working for him, our government suspected of working with the Russians, because the purpose of a counterintelligence investigation is to protect the people being targeted by a foreign government.

But what happened after the election is equally important to me. The counterintelligence investigation continued on the transition team, that’s how General Flynn got in trouble. What basis did the government have to follow the Trump transition team? How did it get leaked out to the public that there was a counterintelligence investigation going on against General Flynn, while he was in transition, leaking this information, after the election, is just as important to me as spying before the election.

MARIA BARTIROMO: Yeah, and there were two really important things that came out last week that Barr suggested. Number one, that it wasn’t just a bunch of small cabal of people at the top of the FBI, but there was information going through lots of different intel agencies: the State Department, the CIA, that’s one thing I’d like to get your reaction on as well, Senator.

LINDSEY GRAHAM: Well how wide was the problem? How deep was it? And what was the basis of it? Why was the United Nations un-masking people, American citizens caught up in conversations? Was there any legitimacy at all to the idea of Papadopoulos working with the Russians, or did they plant that idea in his head about the Clinton emails being in the hands of the Russians? Did it come from him working with the Russians or somebody working with us?

At the end of the day, was there any reason to believe that Carter Page was working with the Russians, or was it all based on a dossier that’s a bunch of garbage?

And in transition, as the Trump team is trying to take over the government, why was the counterintelligence investigation still ongoing? Who leaked the fact that there was one to the Washington Post, who dimed out all of these people that were in transition to the media? That’s a violation of the law. And was there an attempt to invoke the 25th amendment after the election?

Democrats, if you’re trying to get Trump, they really don’t care how you’re trying to get him. I really do care about the rule of law. Most Democrats don’t care about this because they thought it was a worthy endeavor to try to take Trump down, so I’m hoping some Democrats will change their tune, because if you can do this to a Republican one day you can do it to a Democrat.

MARIA BARTIROMO: I think this is a really important point you’re making, it feels like a Kavanaugh moment, senator, where the Democrats and the media just threw out all of what we deem is so valuable and important as Americans in a free democracy, that is due process, innocent until proven guilty. Here we go again, as they try to rip down Attorney General Bill Barr.

LINDSEY GRAHAM: Well you know they accuse Trump of changing all the rules in Washington. I would suggest that all the rules have been changed to get Trump. Kavanaugh’s nominee was not presumed innocent because he was a conservative. The way they treated Brett Kavanaugh was to try to destroy his life and drive him out of wanting the job, hoping he would quit.

They’re attacking Bill Barr now one of the most seasoned, highly-respected legal minds in the United States. Nothing has changed about Bill Barr since he was attorney general under Bush 41. The only thing that’s changed is the desire to get Trump, no matter how you have to get him. So if you need to destroy Barr they will, and if you need to destroy Kavanaugh they will, if you need to make up stories to get a warrant they will, if you need to open up a counterintelligence investigation based on bogus information to try to get into the Trump campaign to find out what he’s up to, to create an “insurance policy,” I think they will. There was nothing they wouldn’t do to get Trump and America needs to understand this can happen to both parties. Let’s hold them accountable and stop it, now.

Share This Post
Like it? Vote it up!
00
Previous Article‘Big Brother Is Watching’: Facebook Includes Bizarre Messages in Oculus VR ControllerNext ArticleJoe Scarborough: Bill Barr Is Destroying His Legacy With “Spying” Claim, “Everything Was Done By The Book” | Video
You May Also Like

Dems Would Tie U.S. Hands Behind Its Back on Energy
September 14, 2019
Palestinian terrorist prisoners start hunger strike over Israeli jamming of their smuggled cell phones
April 9, 2019

Joe Scarborough: Bill Barr Is Destroying His Legacy With "Spying" Claim, "Everything Was Done By The Book" | Video

MSNBC's Joe Scarborough and the "Morning Joe" crew discuss Attorney General Bill Barr's statement that he believes "spying did occur" on the 2016 Trump campaign."It's such a total lie. Everybody on the planet knew the second he said that that it was being thrown out as red meat," he said

Facebook finds itself in hot water once again as it owns up to mistakenly inserting a variety of bizarre messages into the Oculus Touch virtual reality controller, including “Big Brother is Watching,” and “We see you!” While Oculus co-founder Nate Mitchell says the messages — which include “This Space For Rent”,