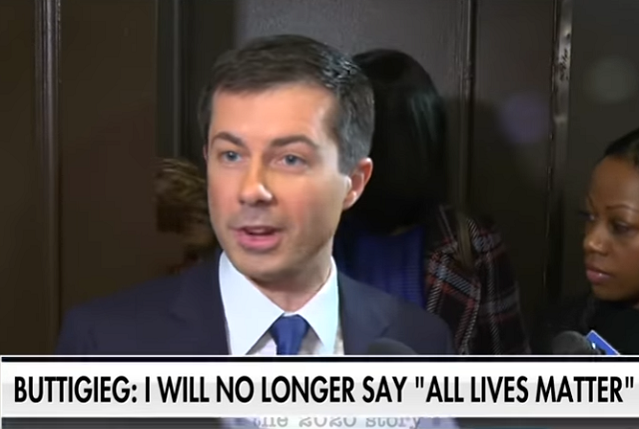 You can’t make this stuff up

Much to the chagrin of the leftist feminist contingent, the mayor of South Bend, Indiana is making quite a splash in the Democrat media with his 2020 presidential bid.  Affectionately dubbed “Mayor Pete,” Pete Buttigieg has enjoyed fawning, gushing press for the past week or so.

Not so fast, though, because not every leftie is on board with Buttigieg’s 2020 aspirations.  We know this because he was recently accused of saying, back in 2015, that all lives matter.

The gasps and swooning outrage from the left are . . .  predictable.  From the middle and right, though, are head shakes and questions about “Mayor Pete’s” backbone and principles.

South Bend mayor and Democratic presidential hopeful Pete Buttigieg said Thursday that he is no longer using the phrase “all lives matter.” Buttigieg referred to the phrase while speaking at Al Sharpton’s National Action Network convention, which has become a high-profile event for Democratic candidates.

In his speech, Buttigieg stressed the importance of addressing racial inequalities. “Racial justice must be compatible with being pro-rule of law and respectful of law enforcement doing the right thing. It should enhance, not diminish, the value of a good police department when we assert what should go without saying. But in these times it has to be said clearly, again and again, that black lives matter,” Buttigieg said.

Buttigieg had said “all lives matter,” a phrase disliked by activists, in his 2015 State of the City address. . . .

On Thursday, after speaking to the largely African American audience, Buttigieg told reporters he didn’t initially realize how the phrase “all lives matter” was used to undercut and “devalue” the Black Lives Matter movement. “Since learning about how that phrase was being used to push back on that activism, I stopped using it,” the mayor said.

A CNBC report on Wednesday first highlighted Buttigieg’s use of “All Lives Matter” in a 2015 State of the City Address he delivered to his constituents in South Bend referencing two racial controversies surrounding the city’s police officers.

“There is no contradiction between respecting the risks that police officers take every day in order to protect this community, and recognizing the need to overcome the biases implicit in a justice system that treats people from different backgrounds differently, even when they are accused of the same offenses,” Buttigieg said in his speech four years ago. “We need to take both those things seriously, for the simple and profound reason that all lives matter.”

Recognizing the backlash from the left as the potential problem it could well be, Buttigieg explained that he wants to help the African American community via a number of agenda items.

Buttigieg’s use of the term could be seen as a potential vulnerability for a white man trying to win over minority voters while distinguishing himself among the most diverse crowd of Democratic presidential candidates ever assembled.

The 37-year-old veteran, and openly gay mayor, spoke at the conference Thursday about his plans to help the black community by improving black homeownership, entrepreneurship, education and health care, and reforming the criminal justice system.

Share This Post
Like it? Vote it up!
00
Previous ArticleCity fails to privatize public sidewalk to protect abortionistsNext ArticleNice Graffiti
You May Also Like
3 Key Facts About California's 'Medicare for Illegals' Plan
June 16, 2019
What Do Federal Watchdogs Do Most of the Time?
August 30, 2019

Why Tens of Thousands Come Together to Hear Trump Speak
August 20, 2019

Latest news
Trump Is Laughing His Way Back to the White House
Warren Needs to Play to Win--and That Includes Beating Sanders
McSally's Reality Check for CNN's Partisan Clowns
What the Senate Should Learn From the House GOP
Trump's Outreach to Latinos Could Be Trouble for Dems
Amtrak's Big Lie
Jussie Smollett's Google Headache
Burrow, LSU Cap Heisman Season, Beat Clemson 42-25 for Title
Impeachment Doesn't Matter -- Health Care Does
'Richard Jewell,' Nicholas Sandmann and the Media Mob
Trump Is Right to Take a Win and Show Restraint vs. Iran
Why Tucker Carlson Is Obsessed With Trash
More Migration Cuts More Wages
What Trump Doesn't Get About Iran's Tactics
The American-Iranian Psychosis, Next Chapter
Pandering to Left, Dems Repeating Mistakes of 2016
March Against Hate: New York Must Stand Against Anti-Semitism
The Dangers Posed by the Killing of Soleimani
Will Sanders Voters Support Biden If He's the Nominee?
Another Year of the Economic 'Experts' Getting It All Wrong
New York's Thickening Cloud of Violent Crime
Pollak: Welcome to 2020, the Year of the Good Fight
The Decade We Changed Our Minds
WaPo Pronounces VA Gov. Ralph Northam ‘Back from the Dead’
The Liberal Media's Sordid History of Russia-Ukraine Fake News
We Live in the Luckiest Era in History, and Here's Why
The Fracking Decade | RealClearPolitics
As Institutions Collapse, We Must Renew Faith in Each Other
Commerce Dept.: Companies Brought $1 Trillion Back to U.S. Under Trump Tax Cuts
Could Dems Impeach Trump Twice? They Might Have To