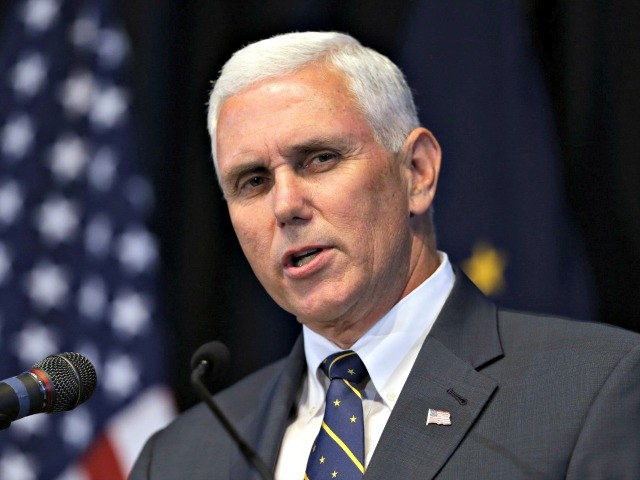 Pence identified the “crisis of illegal immigration, drugs, dangerous criminals, and human trafficking” at the southern border. “It’s a crisis like we’ve never seen before,” he said as he spoke to those attending the Credit Union National Association’s Government Affairs Conference.

“In the last five months alone, Customs and Border Protection has seen a more than 300 percent increase in the number of families apprehended compared to the same period one year ago,” he went on. “My fellow Americans, every day we don’t secure our border, we are allowing the crisis to worsen and more lives to be endangered and exploited.”

Drug cartels and smugglers are exploiting weaknesses at the southern border. The vice president brought this to the attention of the crowd. He cited statistics showing as of 2016 drug overdose has become the leading cause of death for Americans under 55 years of age, “In 2016, all across America, some 174 people lost their lives to drug overdose every single day.”

Members of Congress have expressed their intention to block the president’s declaration.

“Despite the fact that he has clear statutory authority under the National Emergencies Act, some in Congress are actually trying to stop the president from exercising the authority that Congress gave him to address what is an undeniable humanitarian crisis on our southern border,” said Pence.

Pence let the group know that once he left them, he would be going to Capitol Hill to continue discussions on supporting president’s declaration.

“We’re calling on every member of the United States Senate: Set politics aside. Stand up for border security. Stand with this president. And put the safety and security of the American people first,” Pence said to applause from the crowd.

“I encourage each one of you, as you meet with representatives in the House and Senate, just encourage them to take a stand for border security,” he encouraged the group, recognizing that they would be going up to Congressional offices in the coming days. “Encourage them to stand with this president as he’s taking such decisive action to secure our border.”

Tuesday on MSNBC’s “Hardball,” former Massachusetts Governor Bill Weld who has launched an exploratory committee to potentially primary President Donald Trump for the Republican nomination in 2020, compared the president to infamous Roman emperors Nero and Caligula. Weld said, “All his instincts are against the interest of the United States. It’s amazing

Populists and Traditionalists Are Battling in Both Parties

WASHINGTON -- Dick Cheney, the former vice president, made just about the nastiest crack a Republican could offer about President Trump's foreign policy when he said it "looks a lot more like Barack Obama than Ronald Reagan." Obviously, the comparison is flawed. But say this much for Cheney: He's the rare