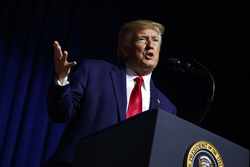 When it comes to missile defense during the Trump administration, there is quite a bit of over-promising and under-delivering.

Distracted by impeachment efforts and other political controversies, one wonders if the president even knows. Trump has repeatedly touted his revamping of the U.S. military. While he’s right that his administration requested $34 billion over last year’s enacted levels, which included a pay raise for U.S. forces and a much-needed replenishment of things like depleted munitions, one of his most public and repeated commitments — to leave a legacy of an adapted, modern missile defense system — has not been realized.

Missiles are the bread and butter of adversary militaries trying to leverage the United States. They are a relatively inexpensive way to hold U.S. interests at risk and U.S. adversaries have been steadily working to improve their arsenals by adding to the number in their inventories and by making them more difficult to detect and intercept. Mitigating the risks in this new missile era requires new thinking and strategies.

So it was encouraging that when the administration published its Missile Defense Review, President Trump wanted to be the one who explained its contents and to emphatically demonstrate that this was his plan.

With soaring rhetoric that called to mind a different Republican president, Trump outlined his administration’s plans for defending the nation, our troops and valuable assets, and allies from the growing threat of missiles.

At the Pentagon, flanked by his senior national security deputies, he said, “Our goal is simple: to ensure that we can detect and destroy any missile launched against the United States — anywhere, anytime, anyplace.” Perhaps a simple goal, but it’s an ambitious one, with bureaucratic and ideological hurdles so high that implementing it will require the constant oversight, commitment, and leadership of the president and his most senior deputies.

The mismatch is clearest in two areas. One, the defense of the U.S. homeland from the kinds of threats North Korea poses. President Trump said:

“We will prioritize the defense of the American people above all else.  Our review calls for 20 new ground-based interceptors at Fort Greely, Alaska, and new radars and sensors to immediately detect foreign missiles launched against our great nation. We are committed to establishing a missile defense program that can shield every city in the United States.  And we will never negotiate away our right to do this.”

Two years after the president first directed the Pentagon to add the 20 new interceptors for the Ground-based Midcourse Defense (GMD) system, they are not in the ground protecting the American people. Giant holes at Fort Greely remain unfilled, a painful metaphor for the president’s speech. There are currently 44 interceptors in the ground and on standby to protect the American people, and although the last few tests of the system proved remarkable good capability, adversaries are getting better and making more missiles, and so the system must continually adapt to stay ahead of the threat.

The Pentagon, with the urging of Congress, set out to improve the system’s reliability before it added the new interceptors to the inventory. But a technical issue arose having to do with the component of the system that collides with the incoming warhead called the kill vehicle. Pentagon leaders decided to cancel the “redesigned kill vehicle” program, leaving the country without a plan to adapt the current homeland defense interceptors. Compounding the problem, the Obama administration cancelled the production line of the most current kill vehicle, the ones we had intended to replace.

In response, the Pentagon has called for the development of an entirely new interceptor that can handle even more complex threats. This is good, but as it stands, there is no plan to put any kind of kill vehicle on the president’s 20 interceptors despite the reality that the threat to American cities from North Korean ICBMs is even more serious today than three years ago.

The Trump document that laid out the new missile defense strategy rightly made the case that missile defense strengthens the hand of diplomats trying to negotiate with U.S. adversaries. As the administration continues to navigate the vexing problem of North Korea’s stubborn nuclear missile program, it cannot afford to permit the homeland missile defense system to flail and falter.

Not only did the budget fail to deliver on adapting the homeland missile defense system to protect the homeland against rogue-state ICBMs, it didn’t adapt the system to defend against evolving missile threats, including from China and Russia.

But, again, President Trump said the country would do so.

It is not enough to merely keep pace with our adversaries; we must outpace them at every single turn.  We must pursue the advanced technology and research to guarantee that the United States is always several steps ahead of those who would do us harm. … We will protect the American people from all types of missile attacks.  In the past, the United States lacked a comprehensive strategy for missile defense that extended beyond ballistic missiles. Under our plan, that will change.  The U.S. will now adjust its posture to also defend against any missile strikes, including cruise and hypersonic missiles.

To provide defense of U.S. bases abroad, and aircraft carriers that project U.S. power in areas where adversaries are contesting American resolve, the United States must have a sensor layer in space. Ground- and sea-based sensors cannot keep a track on missiles that do not follow ballistic trajectories.

The Iranian attack on Saudi oil facilities should serve as a wake-up call. This was an integrated attack using cruise missiles and unmanned aerial systems (UAS) that ballistic missile defense systems are not designed to track and intercept. Iran clearly knows the limitations of the American ballistic missile systems the Saudis have purchased and is adapting its offensive attack. Imagine the damage that China, the country that has tested more missiles in 2018 than the entire world combined, could do to allies, U.S. bases, and assets.

The United States and allies must maintain their ballistic missile defenses, while also adapting strategies and systems to fill in the gaps, and to layer and integrate air and missile defense. To begin to do this, no question, the United States must have a sensor layer that provides persistent tracking from space. The new vice chairman of the Joint Staff, Gen. John Hyten, along with the top science chief, Under Secretary Michael Griffin, and others, have strongly stressed that this is their top priority. Despite their commitment and the president’s direction, they were unable to secure support for it from within the bureaucracy. At an event at the Hudson Institute, I asked Griffin about the need to develop and deploy a space tracking layer and asked why the Pentagon budget request to Congress failed to ask for the needed funding. He said:

So the requirement leads you to a proliferated sensor layer in relatively much lower orbit, so that’s how we get to that point. So you’re completely correct in your question or your opening comment that, at this year’s Missile Defense Review, President Trump quite correctly enunciated the need for such a layer, and yet, our budget didn’t show it. Well, it can take a little bit of time for the bureaucracy to catch up with the elected leadership [emphasis mine], and I think this year, we’re going to be making a stronger try at getting the funding for that space layer into the budget.

The “bureaucracy” is not implementing the explicit mandates of the elected leadership. Unless the president or his most senior deputies focus on the issue, despite other whirling distractions, there is little reason to hope for an improvement in the next — and last — budget request to Congress of this term. That would mean that after a single presidential term, the country is no safer from missile attack than it was during the Obama administration, and if one considers the steady improvement of the missile arsenals of our adversaries, we are perhaps more vulnerable.

Share This Post
Like it? Vote it up!
00
Previous ArticleDem Establishment Is Losing Its Grip With 'Russia' AccusationsNext ArticleNo One Should Be Chemically 'Transitioning' Little Kids
You May Also Like
Trump Is Right: Ending the Endless Wars Starts in Syria
October 19, 2019
Democrats Blame Republicans for Stacey Abrams' Election Loss: ‘It’s About Keeping Black People Down’
June 26, 2019
Report: Man Tries to Board Plane with Rocket-Propelled Grenade Launcher
March 7, 2019

No One Should Be Chemically 'Transitioning' Little Kids

The dark side of the trans movement was absent from CNN's LGBT town hall for Democratic candidates this month. But Americans can now catch a glimpse of that underbelly in the alarming case of James... Source link Veterans In Defense Of Liberty - Vidol

Dem Establishment Is Losing Its Grip With 'Russia' Accusations