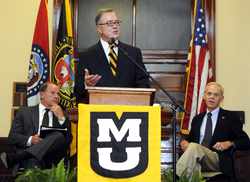 The University of Missouri has faced a tough few years. First, there were well-publicized protests stemming from student allegations that the administration responded inadequately to racial bias on campus. At one particularly charged demonstration, a (since fired) journalism professor called for “muscle” to prevent a student journalist from taking video of the protesters. This was followed by declining enrollment, budgetary shortfalls, the temporary shuttering of dorms, and staff layoffs from which the school has only started to recover.

But Mizzou’s latest challenge comes in the form of a multimillion-dollar lawsuit filed by Hillsdale College, a conservative institution in rural Michigan. In 2002, the university received a $5 million bequest from financier Sherlock Hibbs. A 1926 graduate of Mizzou, Hibbs intended for his grant to fund six professorships at the Trulaske College of Business to be filled by devotees of free market economics.

In order to ensure the money was spent as he intended, Hibbs included in his will a unique enforcement provision. Mizzou would be required to certify every four years to the satisfaction of Hillsdale College that each professorship had been filled by “a dedicated and articulate disciple of the Ludwig von Mises (Austrian) School of Economics.” The remaining funds would revert to Hillsdale in the event that this requirement was not met.

Hillsdale is perhaps uniquely qualified to make this determination — von Mises bequeathed his personal library to the college, where it resides in a special reading room. And officials at the school claim that the University of Missouri has fallen short of Hibbs’ intent.

Hillsdale’s suit is helmed by Jay Nixon, former Democratic governor of Missouri and a Mizzou grad himself. “I believe both from my time as governor and my time as [Missouri] attorney general that donor intent is important. It’s especially important when folks are as specific as Mr. Hibbs was,” Nixon told me. “Missouri University never embraced Mr. Hibbs’ intent, and consequently students aren’t getting the exposure to intellectual philosophies necessary for broad-based education.”

The smoking gun for Nixon’s claim comes in the form of internal Mizzou documents obtained during the discovery process. According to handwritten notes from a February 2003 meeting, Brady Deaton, then university provost (and future chancellor), expressed concerns that acceding to Hibbs’ request would consign the school to being “held hostage by a particular ideology.” Emails from Bruce Walker, then dean of Trulaske, suggest that administrators sought a way around Hibbs’ stipulation by simply recasting descriptions of existing faculty members. Walker emailed colleagues in March  2006, reporting that because “the Austrian School of Economics is quite controversial … [w]e didn’t want to wade into that controversy, so we focused on some Austrian tenets that are compatible with what we do in our business school.” Walker noted that he had made five of the six appointments endowed by Hibbs “all internal for financial and faculty-retention reasons,” only conducting an outside search for one position. The lawsuit argues that no “disciple” of Austrian economics was ever hired.

In an April 2006 correspondence with the faculty members endowed under Hibbs’ gift, Walker seemed to express misgivings about the truthfulness of a certification letter he asked them to sign. “[Chancellor Deaton] and I swallowed hard, and you may need to as well, about attesting to the ‘dedicated and articulate disciple’ part,” wrote Walker, “[b]ut he and I, and hopefully you, believe that using the exact wording from Mr. Hibbs’ will … is the route we need to follow. If we don’t deal with the stipulation directly, I believe we increase the likelihood of a challenge from Hillsdale College.” Walker closed the missive by reminding his colleagues of the stakes: “Remember, we’re all working toward the same goal, namely approval of the report … by first the Curators and then Hillsdale College – both without publicity, use of much more of all our time, and without a challenge by Hillsdale College and potential legal battle that would ensue from that.”

Walker’s hesitancy to identify his faculty members as adherents of the Austrian School appears justified. Steve Horwitz, secretary of the Society for the Development of Austrian Economics from 1996 until 2014, told me, “I can say with near certainty that none of the signers of that letter were ever members of the society,” which he characterized as “the only professional organization of academic Austrian school economists.”

As for the amount Hillsdale is seeking in the lawsuit, a spokesperson said in an email: “The original $5M, any amounts earned on the original gift, and all amounts paid to unqualified appointees. According to MU, that amount is between $13M-$14M, but they can verify that.”

The University of Missouri did not respond to a request from RealClearPolitics for comment.

I spoke with Hillsdale economics professor Ivan Pongracic Jr. about Mizzou’s apparent hesitance to embrace the Austrian School. (Pongracic is the William E. Hibbs/Ludwig von Mises Chair of Economics at the Michigan school; the Hibbs connection is no coincidence — that chair was endowed by Sherlock Hibbs in memory of his father.) Pongracic conceded that “there’s no question that Austrian Economics is not part of the mainstream. However, you have many schools of economic thought that are heterodox — outside of the mainstream but still legitimate.” Pongracic told me that the tradition effectively died off in the 1960s, but has been experiencing a slow and steady revival since the mid-1970s. He pointed out that the famed Austrian economist Friedrich Hayek, recipient of both the Nobel Prize and the Presidential Medal of Freedom, pursued lines of research established by von Mises. “So many concepts considered to be at the core of modern economics have come from Austrians,” Pongracic said.

Perhaps these core ideas lie among the “Austrian tenets” that Walker hoped would satisfy Hibbs’ conditions. Jay Nixon is not convinced. “Schools should vet potential donors on the front end,” he said, “but once they accept the resources, they must embrace the purposes for which they were given. Focused on this bequest, my alma mater didn’t do it in this matter.”

Disclosure: The author of this piece is a graduate student at Hillsdale College. He has not studied under any professors of Austrian economics, as economics is not a part of the graduate course of study.

Bill Zeiser is the editor of RealClearPolicy.

Share This Post
Like it? Vote it up!
00
Previous ArticleNYT Fudges Book Sales Data to Torpedo 'Justice on Trial'Next ArticleThe Economist Who Would Fix the American Dream
You May Also Like
Your daily dose of spiritual inspiration
April 6, 2019
Jussie Smollett's Google Headache
January 14, 2020

Impeachment Farce Has No Respect for Due Process
October 21, 2019

The Economist Who Would Fix the American Dream

No one has done more to dispel the myth of social mobility than Raj Chetty. But he has a plan to make equality of opportunity a reality. Source link Veterans In Defense Of Liberty - Vidol