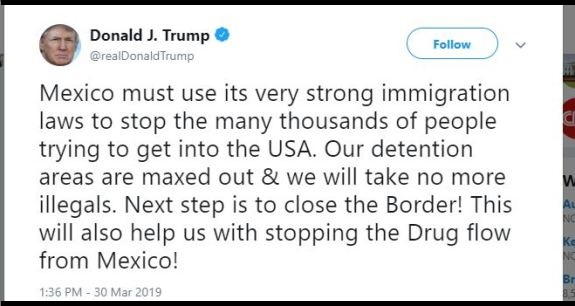 We have said on a number of occasions that the Constitution is not a suicide pact and that a dysfunctional or politically gridlocked Congress should not be able to use specious separation of powers arguments to put the sovereignty of the United States and the lives and property of its citizens in jeopardy.

That is why we believe that the President Trump’s Article II duty to enforce the laws of the United States and defend its Constitution trumps the appropriations clause of Article I and empowers the President to reprograms funds to secure the border in the absence of congressional action to stop the ongoing invasion of our country.

But stopping the invasion is not a one solution problem – there are many actions the President can and should take to prevent millions more illegal aliens from entering the United States.

One of the simplest and most effective actions he could take is to close the border with Mexico, and it seems like President Trump is inching toward the decision to do so.

“It certainly isn’t a bluff. You can take the president seriously,” she said on “Fox News Sunday,” adding, Congress “can fix this.”

“Congress can fix the problem of immigration that they’ve failed to fix. This president is looking at the metrics,” she said, adding the U.S. has “never seen a surge” in immigration “like this.”

On Friday, Trump said “there’s a very good likelihood” he would close the southern border this week.

“Mexico is going to have to do something, otherwise I’m closing the border,” Trump said according to reporting by POLITICO’s Martin Matishak.

President Trump has already cut off aid to the Central American countries of El Salvador, Guatemala and Honduras and is ramping up pressure on Mexico to stop migrants from illegally crossing its territory.

According to The New York Post’s Mark Moore, CNN host Jake Tapper questioned whether withholding that money will cause the problems of crime and economic uncertainty in those countries to become worse and exacerbate the immigration problem.

“If it’s working so well, why are the people still coming? Why are these historic numbers? Again, 100,000 people will cross the border this month alone,” Mulvaney said. “That is a crisis, it’s a humanitarian crisis, it’s a security crisis. … The proof is in the numbers, it’s not working well enough to help solve our border problem and that’s what the president’s focused on.”

More than 100,000 illegal immigrants are poised to cross the US border into Texas — a crisis threatening to overwhelm facilities operated by the feds as well as shelters run by cities near the border, according to shocking new reports summarized by Mr. Moore.

That’s the biggest monthly total in more than a decade, according to USA Today.

We think the President should immediately invoke Section 215(a) of the Immigration and Nationality Act, that gives the president broad leeway to indefinitely close border traffic.

Art Arthur, a former federal immigration judge and general counsel to the Immigration and Naturalization Service told The Daily Signal that, “The president has the authority to set limits at U.S. designated ports of entry.”

However, Arthur, a resident fellow of law and policy at the Center for Immigration Studies, said he doesn’t doubt lawsuits could ensue.

“Anything can be litigated,” Arthur said. “It could either be a citizen who wants to go to Mexico or a transportation company suing over travel. But the president has broad authority under 215a. A district judge could always grant an injunction, as they’re not shy to do. But this would survive judicial review.”

“There is no question that President Trump has the legal authority to close the border; that has been done by previous presidents with no one questioning that authority,” von Spakovsky, a former Justice Department lawyer, told The Daily Signal. “Any lawsuit to prevent this would be a frivolous lawsuit with no merit.”

The president says he could shut down the border as soon as this week if Mexico does not stop the flow of illegal migrants into the U.S. Naturally, the ACLU says it plans to sue if that happens.

We urge CHQ readers and friends to contact President Trump through this link. Let the President know you agree that the southern border must be closed and that the invasion of our country must be stopped.