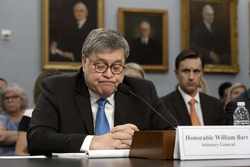 The conclusion of the Mueller investigation has created an interesting litmus test that reveals the underlying political biases of the American public.

As with a normal litmus test, let’s say the results will either turn red or blue, but in this case those colors do not signify acid or base, nor do they even signify Republican or Democrat as convention would have it, nor even truth and falsehood as distinguished by the color of the pills in “The Matrix.”

What the litmus test of the Mueller report reveals is whether or not we as individuals, as political parties and as Americans have faith in our government.

According to a recent poll, 84 percent of Americans want the entire report by Special Counsel Robert Mueller released to the public. They aren’t satisfied just knowing that the investigation into President Trump’s alleged collusion with Russia is over after two years. They aren’t satisfied with the attorney general, a distinguished public servant, explaining the results of the investigation as he is mandated to do by law. No, they want to see the report for themselves … they want to go over it with the proverbial fine-tooth comb and hunt down every inconsistency, every missing comma, every hidden clue that what they already know to be true is indeed true — that they can’t trust the government, that the wool is being pulled over our eyes, that the system serves some ulterior purpose and works on behalf of someone or some group that is not us.

That is a horrid condition for the body politic to find itself in. It suggests a complete lack of confidence in our leaders, in our institutions, even in our Constitution. But it is even worse news for the Democrats who are leading the charge to see the “full” report because for them it also reveals a deep underlying hypocrisy. Democrats, after all, are the party of big government. The basis of their entire theory of human liberty and advancement is that we can count on the government for anything, that it is the answer to all our problems.

What the demand for transparency means at its core, however, is that we don’t trust government. There are good reasons why that is true, starting with (for many of us) the JFK assassination, but in fact there is no such thing as 100 percent transparency. You cannot look into the soul of the attorney general or the president and certainly not the soul of the soulless bureaucracy that ultimately runs our government.

So when the Democratic leaders of Congress say they don’t trust Attorney General William Barr to tell the truth about a report that he is about to make public, they not only defy logic; they defy the very philosophy of the Democratic Party.

It makes sense for Republicans to distrust government. That distrust is in their DNA. Ronald Reagan famously quipped (long before he became president) that the nine scariest words in the English language are “I’m from the government, and I’m here to help.”

But Democrats take the opposite tack. They believe as a matter of faith that we the people should put our entire faith in the government, and therefore the party’s full-court press against the Trump administration by definition undermines their own philosophy. They are in fact teaching people to distrust government even more than they already do.

Thus, when Nancy Pelosi said last week that she doesn’t trust the attorney general, she is ultimately weakening the Democratic case for turning health care, student loan debt, education or anything else over to the feds. If our chief law enforcement officer can’t be trusted, who can be?

Barr got Pelosi’s goat Wednesday morning when he testified before a Senate committee that he believes “spying did occur” against the Trump campaign in 2016 by elements of the U.S. intelligence apparatus. To those of us who fall on the red side of the Mueller litmus test, that is an obvious conclusion — as obvious as that it’s laurel, not yanny, in the famous internet audio clip. But to Pelosi, hearing Barr state plainly that he thinks Obama-era spooks were haunting the Trump campaign is automatically translated into the equivalent of “yanny” — namely, that Barr is either an agent of Russia or that he is obstructing justice on behalf of his puppet master Donald J. Trump.

If it weren’t so fascinating as a real-life experiment in human psychology, it would be laughable. Pelosi was seething as she spit out the following:

No, what undermines our Constitution and our government is people like Nancy Pelosi questioning the motives and honor of good people who have chosen public service as a higher calling while at the same time she tirelessly defends James Comey, John Brennan and James Clapper, who appear to have used their plenary powers to intervene in 2016 and either prevent or subvert the election of Donald Trump.

Barr has said he will get to the bottom of what happened — that he will launch an investigation into how the government decided to spy on Trump’s campaign. As Barr said, “spying on a political campaign is a big deal.” That should not be a partisan issue, but based on the liberal heads exploding Wednesday afternoon, it sadly is. You say yanny, but I say laurel. If it’s fair for Speaker Pelosi to question the motives of Attorney General Barr, then it’s certainly fair for me to question the motives of former FBI Director Comey and his cohorts at the bureau and in the Justice Department.

The only way we can make the litmus test for trust in government the same for all Americans is if we test that trust through fair investigation. Don’t just tell us that Mueller can be trusted, but Barr can’t. Subject both of them — and all of our public servants — to the same rigorous examination. Find out where the truth leads. We’ve had two years of investigation of President Trump based on salacious allegations funded by the Hillary Clinton campaign. Now let’s apply the same level of scrutiny to the Democrats who have assured us without evidence for two years that the president colluded with Russia.

We already know we can’t trust our government, so let’s do the next best thing. Let’s find out who lied to us — when, why and about what. Nancy Pelosi should not be able to stop that. No one should.

Frank Miele, the retired editor of the Daily Inter Lake in Kalispell Mont., is a columnist for RealClearPolitics. His new book — “The Media Matrix: What If Everything You Know Is Fake” — is available at Amazon. Visit him at HeartlandDiaryUSA.com to read his daily commentary or follow him on Facebook @HeartlandDiaryUSA or on Twitter @HeartlandDiary.

Share This Post
Like it? Vote it up!
00
Previous ArticleTrump's Moves Are Straight From the Dictator's PlaybookNext ArticleUnions Worry 2020 Democrats Ignoring ‘Kitchen-Table Economics’
You May Also Like
What Trump Is Doing to ‘The Nation Is Horrible’
March 17, 2019

What Biden Is Teaching Democrats About Democrats
May 14, 2019
Climate Change Extremism Isn't Popular–It Never Will Be
October 18, 2019
Iran's Eye-for-an-Eye Strategy in the Gulf
July 20, 2019

Latest news
Trump Is Laughing His Way Back to the White House
Warren Needs to Play to Win--and That Includes Beating Sanders
McSally's Reality Check for CNN's Partisan Clowns
What the Senate Should Learn From the House GOP
Trump's Outreach to Latinos Could Be Trouble for Dems
Amtrak's Big Lie
Jussie Smollett's Google Headache
Burrow, LSU Cap Heisman Season, Beat Clemson 42-25 for Title
Impeachment Doesn't Matter -- Health Care Does
'Richard Jewell,' Nicholas Sandmann and the Media Mob
Trump Is Right to Take a Win and Show Restraint vs. Iran
Why Tucker Carlson Is Obsessed With Trash
More Migration Cuts More Wages
What Trump Doesn't Get About Iran's Tactics
The American-Iranian Psychosis, Next Chapter
Pandering to Left, Dems Repeating Mistakes of 2016
March Against Hate: New York Must Stand Against Anti-Semitism
The Dangers Posed by the Killing of Soleimani
Will Sanders Voters Support Biden If He's the Nominee?
Another Year of the Economic 'Experts' Getting It All Wrong
New York's Thickening Cloud of Violent Crime
Pollak: Welcome to 2020, the Year of the Good Fight
The Decade We Changed Our Minds
WaPo Pronounces VA Gov. Ralph Northam ‘Back from the Dead’
The Liberal Media's Sordid History of Russia-Ukraine Fake News
We Live in the Luckiest Era in History, and Here's Why
The Fracking Decade | RealClearPolitics
As Institutions Collapse, We Must Renew Faith in Each Other
Commerce Dept.: Companies Brought $1 Trillion Back to U.S. Under Trump Tax Cuts
Could Dems Impeach Trump Twice? They Might Have To

LAS VEGAS (AP) — Ardently liberal, pro-labor and anti-corporate cash, the field of Democrats running for president may look like a union activist’s dream. But some key labor leaders are starting to worry about the topics dominating the 2020 conversation. The candidates are spending too much time talking about esoteric issues

Trump's Moves Are Straight From the Dictator's Playbook

Demonising the 'other', confecting a crisis to entrench power and using cruelty to spread fear are all part of an assault on democracy Source link Veterans In Defense Of Liberty - Vidol