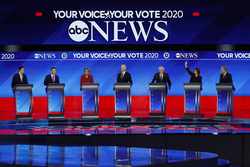 Whoever walks out of Milwaukee and the Democratic National Convention with the presidential nomination in July will be labeled. Would they mind what comes with it? In other words, do they worry about being defined as a “democratic socialist”?

None objected to the ideological categorization when asked Friday night by ABC News moderator George Stephanopoulos, none, that is, except Minnesota Sen. Amy Klobuchar. She minded. The other moderates on the debate stage in New Hampshire were quiet. Klobuchar raised her hand. Alone.

“Bernie and I work together all the time, but I think we are not going to be able to out-divide the divider-in-chief, and I think we need someone to head up this ticket that actually brings people with her instead of shutting them out,” Klobuchar argued, dodging the question but still trying to make a distinction.

It was a lonely admission of the fact that the field has tilted left. And fast. What was verboten during the days of Barack Obama has become not only acceptable but something of a prerequisite. Only Klobuchar, trailing behind the rest of the pack, was there in prime-time to offer an alternative, albeit, sheepishly.

Election Day in the second-in-the-nation primary is just four days away. Candidates met on a debate stage provided by Saint Anselm College. Aside from the conscientious objection of Klobuchar, none of the assembled dared challenge the orthodoxy that will soon define the party come November.

Then they quibbled over policy in the established parameters.

But right out of the gate, the national front-runner in the race, former Vice President Joe Biden, admitted that he was probably going to lose in the Granite State. He said that he “took a hit in Iowa,” a contest where he came in fourth according to unofficial results, and predicted on stage in New Hampshire, that he will “probably take a hit here.”

Meanwhile, Bernie Sanders, the candidate who has remade the policy platform of the party in his own image, dodged what will certainly be an attack if he becomes the nominee. Socialism? Who cares, he replied. After all, he said, the person most likely to lodge that question, the current president of the United States, is a liar.

Establishing loyalty was much more important that probing ideology. “No matter who wins this damn thing,” Sanders said, “we’re all going to stand together to defeat” the president.

Not everyone was willing to concede philosophical ground. This included Pete Buttigieg, the former mayor of South Bend, Ind., who declared victory in Iowa before the contested results were confirmed. He said Sanders was too consumed with ideological purity.

“We have got to bring as many people as we can into this process,” Buttigieg said, knocking Sanders and other unnamed progressives for implying that “if you don’t go all the way to the edge or it’s out — politics that say it’s my way or the highway.” Buttigieg, who kept his hand down during the socialism question, has long argued that there is a middle ground between the “status quo” in Washington and “the revolution,” which Sanders champions.

Buttigieg also defended himself from criticisms that he is ungrateful for the “politics of the past.” Biden said that he had broken significant ground with the last president, Barack Obama. The mayor responded by saying that past victories were not enough.

“Those achievements were phenomenally important because they met the moment,” Buttigieg argued. “But now we have to meet this moment. And this moment is different.”

Elsewhere, there were arguments over preserving and expanding Obamacare versus adopting “Medicare for All.” There was also quibbling over electability. Little ground was broken in this debate that hadn’t been trod in previous contests.

But each of the competitors onstage admitted to the moderators, aside from Klobuchar, that they were unafraid of the label that would come attached to the nomination. Trump will call them “democratic socialists.” Their attitude seemed to be: “What, me worry?”

Candidates who have no real support from people of color should not be viewed as serious contenders for the nomination. Source link Veterans In Defense Of Liberty - Vidol

The Bureau of Labor Statistics on Friday added another pile of good news to the mountain of data showing that the contemporary economy is the strongest in generations. Not only did employers create a staggering net 225,000 jobs last month, crushing expectations, but the labor force participation…Read Full Article » Source