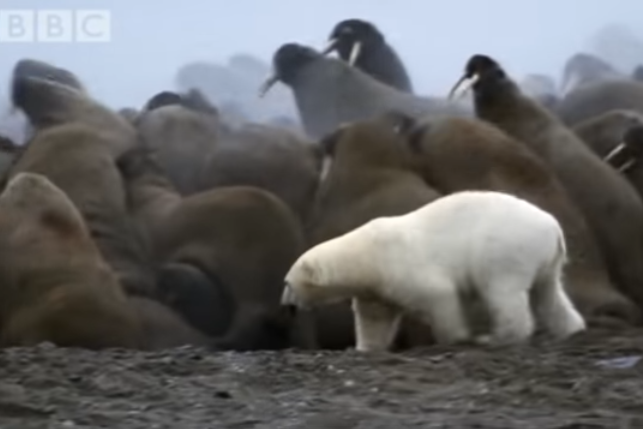 “The walruses shown in this Netflix film were almost certainly driven over the cliff by polar bears during a well-publicised incident in 2017.”

There are two types of science practiced today: Real science and politicized science.

Netflix has come under fire for allegedly trying to palm off fake information about walrus deaths as serious proof of climate change.

The Our Planet footage, narrated by David Attenborough, showed dozens of the animals climbing up 80 metre high outcrops in northeast Russia because of a lack of sea ice.

They were shown plunging onto the rocks below, with hundreds of dead animals piled on the shoreline. A voice-over by Attenborough claimed their poor eyesight made it hard for them to return safely to the ocean.

However, it turns out a more reasonable explanation exists when it comes to these walrus deaths, according to Dr. Susan Crockford, a Canadian zoologist specializing in evolution and the ecology of Holocene mammals (including polar bears and walrus):

Dr Susan Crockford, a zoologist, told The Telegraph that Netflix’s narrative over the Our Planet scene is “contrived nonsense” and that “This powerful story is fiction and emotional manipulation at its worst”.

“The walruses shown in this Netflix film were almost certainly driven over the cliff by polar bears during a well-publicised incident in 2017.”

“Even if the footage shown by Attenborough was not the 2017 incident in Ryrkaypiy, we know that walruses reach the top of cliffs in some locations and might fall if startled by polar bears, people or aircraft overhead, not because they are confused by shrinking sea ice cover.”

At the time of this report, Netflix has not identified the site, or sites, that were included for the walrus herd in their film or specified exactly when the cliff incident occurred.

Anthony Watts, weather technology expert and author of the “Watts Up With That” climate website, has taken a look at the footage and also suspects the footage captured was the 2017 Siberian incident.

I’ve been able to show that Crockford’s supposition about the geographical origin of the footage is correct: analysis of the rock shapes in the film and in a photo taken by the producer/director both match archive photos of Ryrkaypiy. The photo was taken on 19 September 2017, during the events described by the Siberian Times.

But whereas the Siberian Times and Gizmodo website, which also reported on the 2017 incident, were both quite clear that the walruses were driven over the cliffs by polar bears, Netflix makes no mention of their presence. Similarly, there is no mention of the fact that walrus haulouts are entirely normal. Instead, Attenborough tells his viewers that climate change is forcing the walruses on shore, where their poor eyesight leads them to plunge over the cliffs.

This is all very troubling as it raises the possibility that Netflix and the WWF are, innocently or otherwise, party to a deception of the public.

According to a 1983 investigation by Canadian Broadcasting Corporation producer Brian Vallee, the lemming scenes were faked. The lemmings supposedly committing mass suicide by leaping into the ocean were actually thrown off a cliff by the Disney filmmakers. The epic “lemming migration” was staged using careful editing, tight camera angles and a few dozen lemmings running on snow covered lazy-Susan style turntable.

Share This Post
Like it? Vote it up!
00
Previous ArticleWhy Democrats Freaked Out When Barr Told the TruthNext Article‘Give Teachers a Raise, Not Guns’
You May Also Like
Waiting for Peak Trump
May 6, 2019
College Admissions Bribe Scandal: Lori Loughlin's Daughter Bragged About Skipping Class
March 13, 2019

'Give Teachers a Raise, Not Guns'

Why Democrats Freaked Out When Barr Told the Truth

We're in an era where politicians and the media cheer on (and cover up) actions resembling third world police state activity that further their cause. Source link Veterans In Defense Of Liberty - Vidol