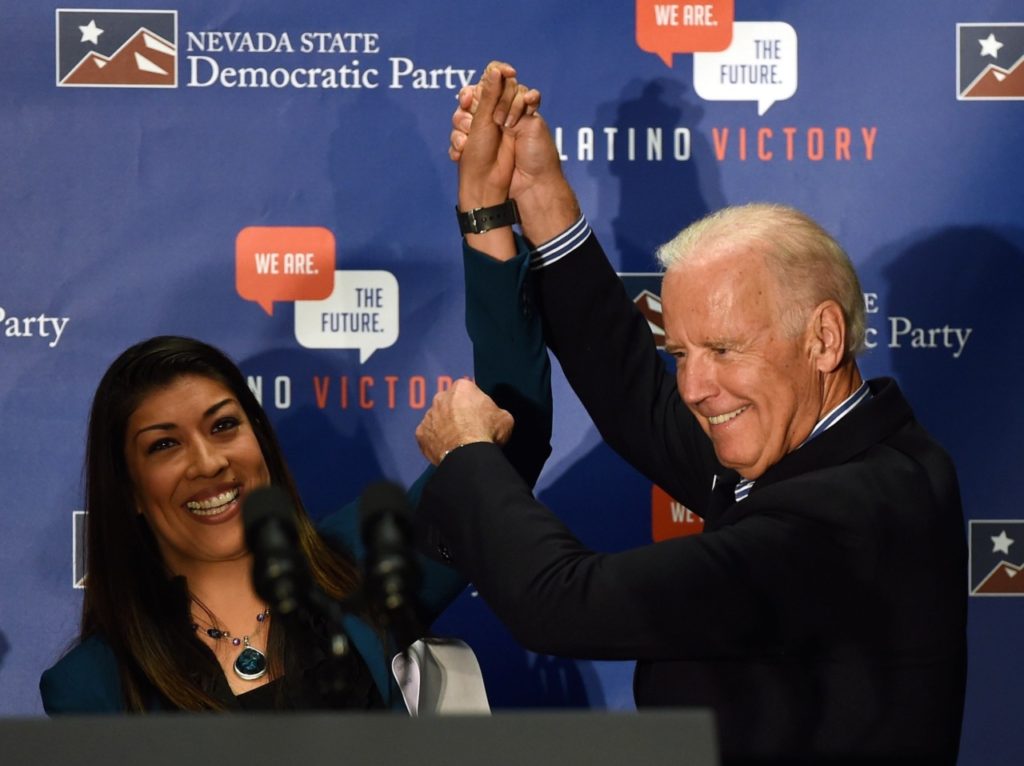 The New York Times has taken a critical look at what it calls former vice president Joe Biden’s “tactile style of retail politicking,” noting that his penchant for touching people — including women and girls — at public events is now an issue in the Democratic Party presidential primary for 2020.

Biden has not yet declared that he is running, but he is expected to jump into the race soon, and currently leads in many polls of Democratic primary voters.

The Times notes the emergence of a nickname for Biden on the Internet — “Creepy Uncle Joe” — and explains (original link):

Joseph R. Biden Jr. came up in politics as an old-school backslapper whose greatest strength was his ability to connect. He doled out handshakes and hugs to friends and strangers alike, and his tendency to lavish his affections on women and girls was so central to his persona that it became fodder for late-night television jokes.

But the political ground has shifted under Mr. Biden, and his tactile style of retail politicking is no longer a laughing matter in the era of #MeToo. Now, as he considers a run for president, Mr. Biden is struggling to prevent a strength from turning into a crippling liability; on Tuesday alone, two more women told The New York Times that the former vice president’s touches made them uncomfortable.

For Mr. Biden, 76, the risks are obvious: the accusations feed into a narrative that he is a relic of the past, unsuited to represent his party in the modern era, against an incumbent president whose treatment of women should be a central line of attack. Mr. Biden has denied acting inappropriately but has said he will “listen respectfully.”

So far, no prominent Democrat has suggested he not run, and the women complaining about him have not claimed sexual harassment or assault. Other women have stepped forward to say Mr. Biden’s touches were welcome. But the accusations lodged against Mr. Biden have raised questions about when a “tactile politician” crosses the line into inappropriateness.

The Times article mentions Biden’s latest accuser, Caitlyn Caruso, who said Biden touched her on her thigh during an event on sexual assault at the University of Nevada Las Vegas when she was a student there in 2014.

The first Democrat to accuse Biden of inappropriate contact, former Nevada lawmaker Lucy Flores, said that he should not run for president as a result of his behavior — though she also said she would vote for him over President Donald Trump if he did run. Other women agreed Biden’s conduct was wrong, though some defended him. Speaker of the House Nancy Pelosi said Biden’s conduct was not “disqualifying,” as Biden himself struggled to respond.

Biden is not alone in facing “MeToo”-related accusations. Fellow frontrunner Sen. Bernie Sanders (I-VT) has faced allegations that his 2016 presidential campaign failed to deal with “sexual violence and harassment” by staffers. Sen. Kamala Harris (D-CA), another frontrunner, has found it difficult to explain a $400,000 settlement in 2016 over “gender harassment” by a key aide in her office when she was attorney general of California. And Sen. Kirsten Gillibrand (D-NY), who has made her political career campaigning against sexual harassment in the workplace and the military, has faced accusations that she failed to take action against a staffer accused of sexual harassment.

It is unclear whether Biden’s nascent campaign will be stopped by the sudden outrage over accusations that have circulated in conservative media for years, but there are no reports yet that he is having second thoughts.

Biden’s signature legislative achievement in the Senate, perhaps ironically, was the Violence Against Women Act.

Share This Post
Like it? Vote it up!
00
Previous ArticleFields v Speaker–CPCF et al amici brief (003)Next ArticleSir, can you explain…
You May Also Like
So Now It's OK to Destroy Lives in the Name of Fighting Trump?
June 4, 2019
Cindy McCain Says Country Needs John McCain ‘More Than Ever’
November 10, 2019
Reagan's Supply-Side Warriors Blaze a Comeback
April 22, 2019
Happiness Through Chutzpah: The Norman Podhoretz Story
November 12, 2019
Mann's 'Hockey Stick' Established to Be a Fraud
August 30, 2019

Sir, can you explain... View Reddit by undue-influence - View Source