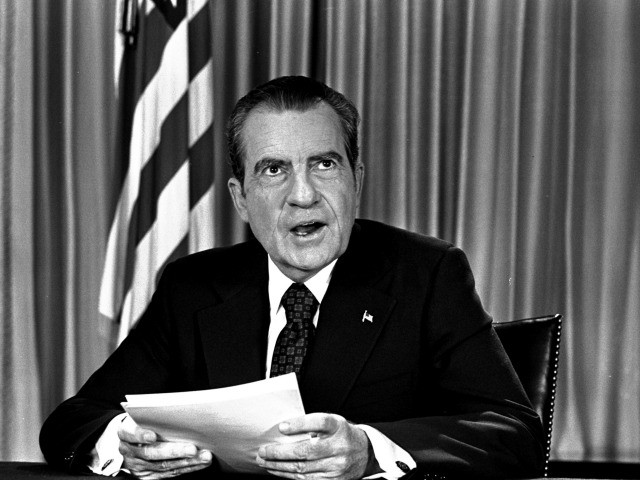 Joe Biden delivered an impassioned plea for the public to presume then-President Richard Nixon “innocent until proven guilty” at the height of the Watergate scandal in 1973.

On Friday, Breitbart News reported on a speech then-Senator Biden made to the City Club of Cleveland, Ohio on May 18, 1973. In his remarks, Biden made comments women might find offensive and used racially insensitive language, especially when lecturing on what he thought “was good for the Negro.” Although portions of the speech initially surfaced in a book by a leftist journalist and the full audio was published by the City Club, no media outlet provided an in-depth account prior to Breitbart News.

While Biden’s remarks about women and minorities drew the most attention, Breitbart News is outlining a number of statements the 2020 Democratic frontrunner made about the presumption of innocence.

At the time of the speech, Biden was 30-years-old and had just been elected to the first of seven terms in the U.S. Senate. He joined at a pivotal moment in the institution’s history. In February 1973, a month after Biden was sworn in, the Senate formed a committee on “presidential campaign activities” to investigate Nixon’s involvement in Watergate. The committee began televised hearings one day before Biden’s appearance in Cleveland.

Unsurprisingly, Watergate dominated much of Biden’s hour-long address to the City Club. An particularly interesting point arose during the the question and answer sessio, when Biden was asked about the public’s perception of the scandal. The young senator, who in his speech accused the Nixon administration of having “assaulted the system” in unprecedented ways, stressed the need for the president to be given the benefit of being “innocent” until proven guilty.

“There are only two alternatives to the bitter end of this thing, neither one of which is palatable,” Biden said. “That is if Mr. Nixon is involved, which I pray to God he’s not because it will be terrible for the country if he is—as much as I’m not fond of him, I think we’ve got to say he is innocent until he is proven beyond a reasonable doubt to be guilty.”

Biden invoked the Bill of Rights to further drive his point home, claiming Democrats had to hold themselves to a higher standard than Republicans.

“We cannot commit the same sins that some of his followers have committed in the past of forgetting that we have a thing called the Bill of Rights,” he said, “and the thing says that you’re in fact innocent until proven guilty beyond a reasonable doubt.”

“But if in fact he were proven to be involved, we’re left with one of two alternatives, neither of which is good: the country goes in chaos; secondly, the reason I don’t want to see the president go under is the alternative we are left with.”

Even though Biden didn’t elaborate on the “alternative,” earlier points of his speech shed some light. Biden began his remarks to the City Club by urging those in attendance not blame the Republican Party or “politicians” like himself for the actions of “a bunch of administrative bureaucrats” behind Watergate.

“Not one of them has ever run for as much as dog catcher, and I think that’s a very important distinction to make,” he added. “It is wrong to blame politicians, those of us who hold elective office, for the responsibility of this scandal.”

At other points in the speech, Biden sternly defended the morality of elected officials from what he saw as “perilous” attempts to label anyone in politics a “thief” or “crook.”

Biden’s emphasis on the presumption of innocence—regardless of political party or profession—as a young senator stands in stark contrast to his later views. His changing views on the subject was particularly evident during Brett Kavanaugh’s confirmation to the Supreme Court last year.

Kavanaugh, at the time a widely respected jurist on the U.S. Court of Appeals, appeared headed smoothly for confirmation until Dr. Christine Blasey Ford, a Palo Alto University professor, accused him of sexually assaulting her in the 1980s while both were students at prestigious private high schools in Maryland.

Senate Democrats, who knew of Ford’s accusations months before they became public, demanded President Donald Trump delay or withdraw Kavanaugh’s nomination. The move was not a surpris, as many Democrats, eager to prevent a five-four conservative majority on the nation’s highest court, had been mobilizing to defeat Kavanaugh from the first moment he was announced.

Biden, who as chairman of the Senate Judiciary Committee drew criticism from the left over his handling of Anita Hill during the Clarence Thomas confirmation hearings, sided with his fellow Democrats in calling for a delay. He elaborated on the decision, saying when women made such accusations, the presumption was they were “real,” not that the accused was “innocent until proven guilty beyond a reasonable doubt.”

“For a woman to come forward in the glaring lights of focus, nationally, you’ve got to start off with the presumption that at least the essence of what she’s talking about is real, whether or not she forgets facts, whether or not it’s been made worse or better over time,” Biden told the Washington Post.

The statement came even though there was little evidence bolstering Ford’s accusations—less evidence in fact than had existed regarding Nixon’s role in Watergate by May 1973.

Not only had Kavanaugh denied the allegations, he also claimed to have never met Ford or been at the party where the assault was said to have occurred. Ford’s case was also hampered by the fact that a number of individuals she claimed were present at the house where the assault took place couldn’t corroborate her story.

In comparison, when Biden urged the City Club to consider Nixon “innocent until proven guilty” in May 1973, the Washington Post had conducted its breakthrough reporting on the Watergate break-in; several top Nixon aides, including the acting director of the Federal Bureau of Investigation, had resigned in connection with the scandal; and one of the men convicted for the Watergate burglary had declared in federal court there was a wider conspiracy.

Biden’s campaign did not return requests for comment on this story.

Share This Post
Like it? Vote it up!
00
Previous ArticleBiden's 'Woman Problem' and the Future of His CampaignNext ArticleJames Is a Strong Recruit for Republicans in MI Senate Race
You May Also Like
“Feels Like the Seeds of a Cover-Up Are Here”
March 24, 2019
Trump Tells 'Phony' Beto O'Rourke: 'Be Quiet' in Respect for Shooting Victims
August 7, 2019
Lieberman: By Not Denouncing Antisemitism, Pelosi and Dems Make Antisemitism Acceptable
March 18, 2019
Israel Allows Rashida Tlaib to Visit Her Palestinian Family
August 16, 2019
Sanders Wants to Bern Israel
February 27, 2020

James Is a Strong Recruit for Republicans in MI Senate Race

In the battle for control of the U.S. Senate in 2020, Republicans got some welcome news Thursday when Republican John James announced that he would challenge De... Source link Veterans In Defense Of Liberty - Vidol

Biden's 'Woman Problem' and the Future of His Campaign

Joe Biden's long legislative record collided with Joe Biden the presidential candidate yet again this week, and the result was disastrous. Source link Veterans In Defense Of Liberty - Vidol