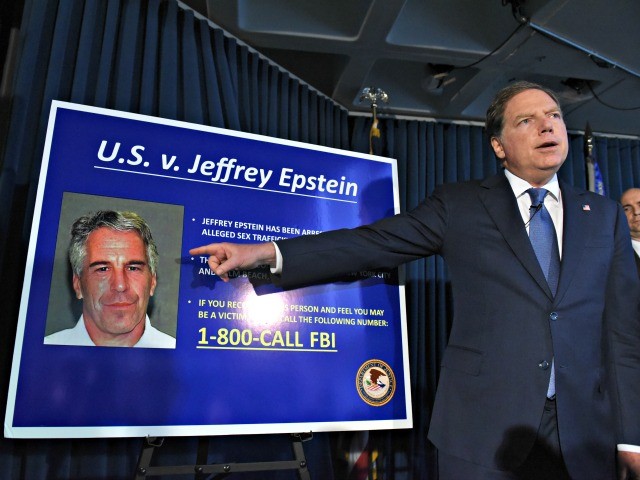 “Nobody’s going to trust the institutions [or] government,” said filmmaker and author Mike Cernovich of authorities’ lack of transparency regarding the death of Jeffrey Epstein combined with broad disinterest across the news media in investigating its circumstances.

“We know that one of the most high-profile people held in federal custody mysteriously died,” said Cernovich of Epstein in a Monday interview on SiriusXM’s Breitbart News Daily with host Alex Marlow.

“According to prison officials, there’s no video of the incident,” Cernovich noted, “and we know that protocol wasn’t followed. [Jeffrey Epstein] wasn’t being monitored, and we don’t know that it’s suicide. The medical examiner said it might be suicide or is apparent suicide. Even that hasn’t been confirmed. Right now, everything we know is quite suspicious.”

“Jeffrey Epstein had been engaging in behavior that is now public for a long time, and nobody in the media cared about it,” recalled Cernovich. “That’s just the facts. You can find it anywhere. Then I took interest in the case in about 2017 and tried to get these records and civil lawsuits and to find out what was happening and, moreover, who he was working with and collaborating with.”

Cernovich continued, “A lot of big names ultimately came out from that: Gov. Bill Richardson — again, these are allegations — was named. A former senator was named; Prince Andrew was named. And these documents are released on Friday, and the next day, Epstein’s dead from suicide. That is one strange coincidence.”

“It just erodes credibility in everything,” Marlow determined. “Law enforcement, government, especially in the media, as if there’s any credibility left. … We’ve got the highest-profile criminal in the entire world — who should be on suicide watch — who somehow dies, and we have no answers. We have no video. We have no witnesses, and we’re already on [Vladimir Putin], we’re not on the total erosion of trust in American institutions.”

Cernovich agreed, “What you said about institutional trust is so on point. How do you trust institutions to do anything after this? This is an El Chapo-level thing; this is the most infamous criminal right now in custody other than the 9/11 terrorists. … This is an El Chapo-level person, and he’s just left to do what? Use shoelaces or something? But he doesn’t even have shoelaces. Nobody’s going to trust the institutions. Nobody’s going to trust the government. No press conference. No basic accountability. No footage.”

“As conspiratorial as I can be at times, I didn’t think he was going to commit suicide, or be suicided or whatever it was,” added Cernovich.

Cernovich went on, “Even the medical examiner’s report said, ‘We’ve done a preliminary report but we can’t give you the full results, yet.’ What do you mean? You claim he killed himself. Are there marks on his neck? What apparatus was used? These are basic forensic questions that should have been easy to answer and we don’t have those answers.”

Epstein was linked to figures holding power “beyond” the Clintons, stated Cernovich.

“Epstein went way beyond the Clintons. Bill Clinton is a joke, nowadays. The Clinton family are a joke. They don’t have any power, political or otherwise. We’re talking royal families. We’re talking trillionaires. We’re talking a level of power and sophistication that goes well beyond prominent figures, [including] names that people don’t even know. … This is so beyond old Bill Clinton, [who] nobody even cares about [and who is not] in power anymore. If we want to look, we want to look at a much higher level. We want to find out where Epstein made his money. … Where are the trades? He allegedly managed [Les] Wexner’s money. Where’s the transaction history? These are things people should stay focused on and keep asking about.”

Epstein’s death will intimidate those he victimized from coming forward, speculated Cernovich. “Imagine, you’ve been abused by the people and you watch Epstein get taken away in jail. Do you ever come forward, knowing that they can get to anybody? I doubt it.”

Cernovich recalled, “There hasn’t been a press conference, actually. If you look at what isn’t happening in this case, there hasn’t been a press conference. There hasn’t been an explanation. Where did he get the shoelaces from? We all know he was in special housing. We all know that he had been on suicide watch. That means he doesn’t have a shoelace. So how’s he do it, man? What are the logistics of it? He’s not going to have bedsheets that he can tie down because they removed all that. So how did he do it? What did he actually use? Nobody knows. He just died. Accept it and move on. This is definitely not going to die down among the people.”

On Monday, the New York Times reported that Jeffrey Epstein used bedsheets to hang himself on Saturday.

Cernovich added, “There will be more documents unsealed. Two thousand documents were released, and those were only the tip of the iceberg. There’s a whole huge docket underneath that people are going to get unsealed. There will be motions to unseal because I’ve laid down a blueprint … that people can follow, and they will try to unseal every case involving Jeffrey Epstein so more might come out.”

The trade war between the United States and China spiraled out of control last week, with threats from the United States of yet more tariffs — this time on shoes, clothes and cellphones — and a hasty determination to name China a currency manipulator at least five years after it stopped doing

China Is a Hostile, Revolutionary Power