German Chancellor Angela Merkel welcomed former U.S. President Barack Obama in Berlin on Saturday. The meeting was closed to the press. The German government spokesman, Steffen Seibert, declined comment on the content of the talks, calling Obama’s visit to the Chancellery in Berlin a “private meeting.”

The duo “did not stop for photos or take questions from journalists, stressing that the meeting was not a political event,” German state broadcaster Deutsche Welle reported, adding that “it is clear that Merkel had a better working relationship with Obama than she does with his successor” President Donald Trump.

Despite official denials in Berlin,  the German media dubbed it a political meeting with the duo discussing the widening rift between Merkel-led government and President Donald Trump’s administration.

“Our President,” the head in the German newspaper Der Tagesspiegel declared, refusing to comes to terms with the outcome of the 2016 U.S. election. “Obama Evokes Nostalgia in Germany,” The New York Times noted.

“Life is so much harder with the new guy,” said the headline in the UK’s Daily Mail, referring to the diplomatic differences between Merkel and Trump. The “pair were spotted in a warm embrace after a meeting at the German Chancellery,” the tabloid added.

German newspaper Die Welt reported the meeting between the two:

Chancellor Angela Merkel met with the former U.S. President Barack Obama for an hour and a half long exchange of views. The main topic is considered to be the strained transatlantic relations. These ties have significantly deteriorated since President Obama’s Republican successor Donald Trump took office. A big contentious issue is the protectionist economic policies pursued by the Americans. (…)

On the eve of the meeting [Friday], Obama received applause from more than 14,000 people at the World Leadership Summit in Cologne. Among other things, The Democratic politician spoke of “confident and cautious optimism” that the United States will soon take the lead in climate protection. Obama did not mention Trump, but it was clear at various times that he was being referred to. [Translation by the author]

The German newspaper Rheinische Post wrote about the political significance of the meeting:

This is a political signal, especially at a time when Donald Trump, Obama’s successor as the U.S. President, never misses an opportunity to criticize Merkel and the Germans. Just recently, he used the ceremonies to mark the NATO anniversary in Washington to slam the ally, Germany. [Translation by the author]

The newspaper was referring to President Trump’s demand that all NATO allies should meet their defense spending targets. As Legal Insurrection reported recently, Berlin was going to renege its NATO spending pledge. As of 2017, the U.S. was shouldering more than 70 percent of the NATO military expenditure. 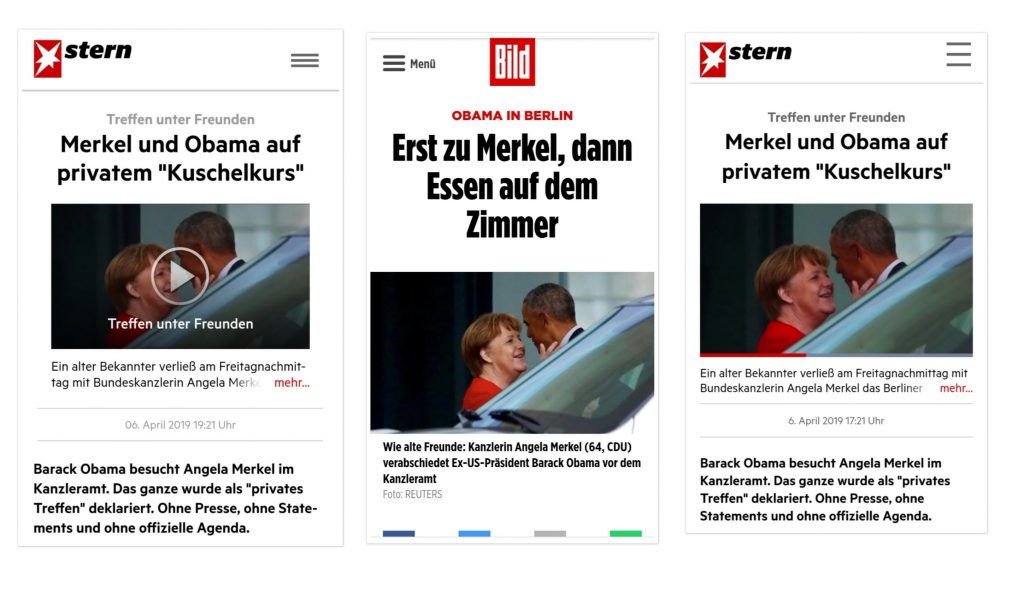 Hillary Clinton’s ‘unexpected’ defeat is widely regarded as the reason why Merkel sought a fourth term back in 2017. As Obama staffer Ben Rhodes admitted in his 2017 memoir, the German leader told Obama that “she felt more obliged to run for another term because of Mr. Trump’s election to defend the liberal international order” (paraphrased by the New York Times).

Today this globalist order is on shaky ground on the other side of the Atlantic. Obama’s highly publicized visit comes in the backdrop if the upcoming European Union election set for late May. Opinion polls project strong showing by nationalist and anti-EU parties. The former U.S. President used his public appearance in Germany to slam the ‘populist’ parties. “Europe, Mr. Obama suggested, is one of the main battlefields between liberal democracy and far-right populism,” The New York Times said reporting Obama’s speech in Cologne on Friday.

Merkel will be traveling to the U.S. to give the commencement speech at Harvard University’s graduation ceremony next month. A meeting at the White House is not yet in the cards, the German media claimed.

Share This Post
Like it? Vote it up!
00
Previous ArticleMajor city offers bounty on Christian leadersNext ArticleObama Is Right: Circular Firing Squad Ensures Trump Win
You May Also Like
Pinkerton – AOC to Small States: Drop Dead (And What Small States Can Do to Stay Alive)
September 6, 2019
Liberals Were Very Wrong About Tax Cuts. Once Again.
May 9, 2019
Thunderbirds Commander Fired for ‘Loss of Confidence’
March 8, 2019
To Understand Trump’s Ukraine Call, You Gotta Know the Code
September 26, 2019
Dems Wrong to Hound Trump with Continuing Investigations
May 24, 2019
Is Ohio Off the Table for Democrats in 2020?
May 11, 2019