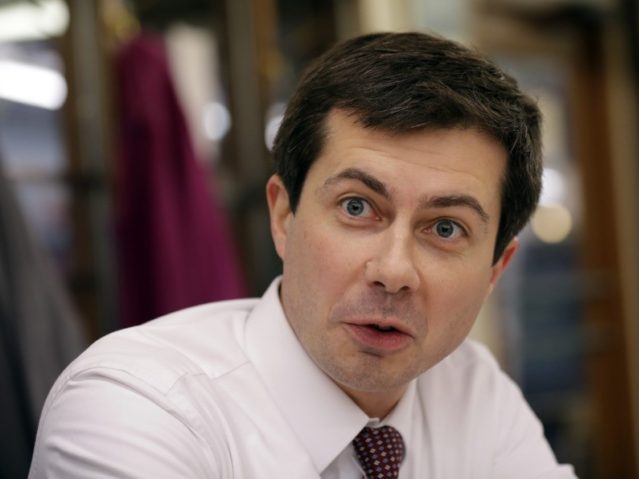 Mayor Pete Buttigieg believes that an assault weapon ban should be “on the table” as part of the 2020 presidential campaign.

“We can draw a line, and that’s not unconstitutional, it’s common sense, and that’s why I think assault rifles need to be on the table too,” he told voters in Iowa on Wednesday.

Buttigieg said that it made sense to draw a line on what kind of guns that Americans could own as part of the Second Amendment.

He asserted he spoke about guns “as somebody who is very familiar from my military training with weapons of war” after serving in the Navy Reserves in Afghanistan carrying a “rifle and a pistol.”

“There are some weapons that just don’t belong in our neighborhoods in peacetime in America,” he said as the audience clapped.

Buttigieg lamented that Congress was unable to pass something like universal background checks for weapons sales.

“The reality is that the gun safety measures that we are calling for are completely compatible with the Second Amendment and, by the way, are widely popular,” he said.

Buttigieg has a history of skepticism surrounding the right for Americans to own semi-automatic rifles but has talked about it cautiously.

“We had an assault weapons ban in this country in the 90s,” he said in March. “I would like to see more research on the effect it had. I do think we need to draw a line.”

He challenged the idea that Americans should even own an AR-15.

“Somewhere between a slingshot and a nuclear weapon, we’ve decided that the American people would draw a line,” he said. “Whether, for example, an AR-15 is on this side or that side of the line, I’m skeptical that it belongs in our neighborhoods in peacetime.”

On Twitter, Buttigieg expressed his frustration that semi-automatic rifles were owned by civilians.

“I did not carry an assault weapon around a foreign country so I could come home and see them used to massacre my countrymen,” he wrote on Twitter in October 2017.

I did not carry an assault weapon around a foreign country so I could come home and see them used to massacre my countrymen.

Share This Post
Like it? Vote it up!
00
Previous ArticlePete Buttigieg Serious about Carbon Tax to Fight Climate ChangeNext ArticleCollusion Dream Is Dead But the Conspiracy Lives On
You May Also Like
Freedom of Speech Is Bad, Says Former Time Editor
October 31, 2019

'Luxury Beliefs' Are the Latest Status Symbol for the Rich
August 22, 2019

The Strange Aftermath of Virginia's Political Scandals
April 2, 2019
On Chicago's West Side, the Street Shows No Fear of Police
March 22, 2019

Bill Barr’s Point About Religion Is Underscored by His Critics
October 26, 2019

Collusion Dream Is Dead But the Conspiracy Lives On

Our political, intelligence, and media elites sold us this crazy story and promised the American people the proof that never came. Source link Veterans In Defense Of Liberty - Vidol