The movie very much affirms this classical conservative storytelling notion.

I can’t begin to tell you what it actually is that writer/director S. Craig Zahler believes in politically. According to the interviews he’s done to promote his newest movie, Dragged Across Concrete, he doesn’t care what people think of his movies. He’s making movies about bad people and he wants to depict them in their entirety without putting a message behind it. That’s a brave notion in the current year.

While some progressive critics like those at Birth Movies Death have come to its defense, a number of reviewers have excoriated the film for its content. The New Yorker called it a “repugnant” expression of “white male rage”, sympathetic to racism, sexism, nativism, and homophobia. The Daily Beast called it a “vile, racist, right-wing fantasy” that legitimizes Mel Gibson after all of his infamous drunken rants.

At the same time, National Review’s film critics Armand White and Kyle Smith have both defended the film, calling it a movie with “spiritual depth” that “pulls the rug out under” it’s more snicking racist cheerleaders. Even Ben Shapiro gave it a shoutout during his podcast.

Again, I can’t say for sure if S. Craig Zahler is a conservative or not. He seems to carry a lot of conservative impulses like the anti-abortion sentiments in his film Brawl in Cell Block 99. Considering he’s also seemingly on good terms with conservative actors like Vince Vaughn and Mel Gibson, it’s not beyond the pale that he’s a part of the secret conservative cabal in Hollywood that Jeremy Boering and Andrew Klavan are always rambling about. Beyond the speculation, I won’t speak further on the topic out of respect for Mr. Zahler.

Seeing some of the critical reactions to Dragged Across Concrete is utterly bizarre. When did seemingly professional critics start ignoring that movies portraying morally shitty characters is not and has never been an endorsement of being morally shitty?

Dragged Across Concrete is a spectacular followup to his first two grindhouse-style films. Bone Tomahawk is a neo-western with the single most disturbing death scene in a film in the past decade. Brawl in Cell Block 99 is a spectacular prison thriller with one of the most harrowing ticking timebomb setups I’ve seen recently.

There’s always a fascinating moral descent in his films. He depicts brutal, unflinchingly violent characters but finds ways to make them empathetic. This tends to perturb progressive viewers since he’s portraying mostly white-male characters with terribly bigoted outlooks. The premise for Dragged Across Concrete sounds like a prank. Mel Gibson and Vince Vaughn play a pair of racist police officers who get suspended from their jobs after their caught assaulting a man on camera.

Now stuck without pay for six weeks, the financially strapped officers decide to pull a heist that could save their families. Taking some intel from a local crime lord, they find out a massive bank robbery is about to take place which they quickly devise a plan to scam the criminals.

The lead characters are portrayed as decidedly of an older generation. They slam the notion of political correctness as a relic holding them back. At one point, they opine that the word racism is the modern equivalent of the term “communist”, a label that destroys you when it’s used against you. As raw and unfiltered as these characters are presented, the movie isn’t tone deaf to their choices. 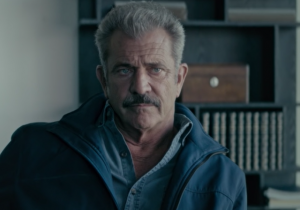 What makes the film great is its implicit moralism. The movie has the structure of a Shakespearian tragedy where in bad characters and their flaws compound and escalate the problems in the world. In spite of the movie’s tendency towards brutal violence (a woman’s skull is crushed and a dead man has his stomach cut open at one point), the movie carries a lot of the same old school values of classic westerns and crime thrillers.

As per all the great classic Hollywood films about bad men, bad men suffer and die for their mistakes. Without spoiling who lives and who dies by the end of the movie, the movie very much affirms this classical conservative storytelling notion. By the end of the film, the men who spiraled into the dark have been consumed by it.

For doing this, the movie ultimately justifies the darkness the characters bring into the world. The two lead police officers are racist, brutal and selfish and ultimately their choices in the movie come to define them.  Violence aside, it’s one of the most old-fashioned films I’ve watched in a long time. That being said, this is definitely not a movie for everyone. Those who are averse to violence and bleak stories should stay far away from this movie.

Share This Post
Like it? Vote it up!
00
Previous ArticleEric Swalwell Pushes Licensing, Insurance Requirements for Gun OwnersNext ArticleJessica Vaughan: 7 Steps Trump Can Take to Solve Border Crisis
You May Also Like
WaPo Pronounces VA Gov. Ralph Northam ‘Back from the Dead’
December 29, 2019

Where the Dem Candidates Stand After the 2nd Debate
August 2, 2019

During his April 9, 2019, town hall in Florida, 2020 presidential hopeful Eric Swalwell (D-CA) said that he thinks licensing and insurance requirements for gun owners are worthy pursuits. Swalwell said, “I think most gun owners who are responsible want to see more licensing, and standards, and background checks. So I do support