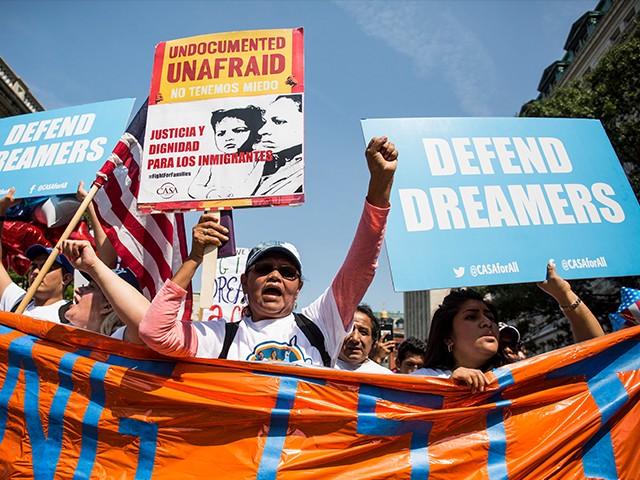 The DREAM Act has reportedly temporarily stalled in the House because amnesty activists are insisting that Democrats grant a pathway to citizenship to illegal immigrants who have committed crimes.

According to a Thursday evening Politico report, the pro-amnesty legislation that House leaders have prioritized as one of the most important of this Congress is now reportedly “on hold, with Democrats scrambling to draft language that can secure enough votes in committee and on the floor” without exposing moderate Democrats to some uncomfortable votes before their 2020 reelection races.

The bill, authored by Rep. Lucille Roybal-Allard (D-CA), would give so-called Dreamers who have not committed a felony or three misdemeanors a pathway to citizenship (“conditional permanent resident status”).

Some moderate House Democrats, according to the report, “worry the language in the bill is too broad and want to consider changes so that committing only certain misdemeanors would allow people to remain on the path to citizenship.”

But these potential changes have reportedly “inflamed” pro-amnesty organizations like United We Dream. Democrats are increasingly becoming beholden to left-wing amnesty groups, and Rep. Pramila Jayapal (D-WA), who co-chairs the Progressive Caucus, reportedly said during a meeting with Democrats on the House Judiciary Committee this week that she and her allies will not support changes to the bill that amnesty groups oppose.

Democrats are now reportedly “waiting to hear from prominent advocacy groups, including United We Dream, on what tweaks they could support to allow the bill to move forward.”

House Majority Leader Steny Hoyer (D-MD), who has vowed to pass the Dream Act as soon as possible, is reportedly less optimistic about his prediction that the bill would get a floor vote this month. According to Politico, “that timeline is in flux amid ongoing issues with the bill.”

Hoyer reportedly acknowledged that though a Dream Act bill will ultimately pass the House, there are “obvious differences of opinion” that have divided House Democrats.

Trump’s Proposal Exposes Dem Dishonesty on Border
April 13, 2019
A Don Corleone Offer to China on Trade
May 10, 2019
Cornell President to Students for Justice in Palestine: “I must reject your call for BDS-related divestment”
March 1, 2019
Dems, Media Aim to Squash Barr's Probe of Collusion Hoax
October 2, 2019

The Times of Israel reports: A man was killed when a rocket slammed into his home in southern Israel early Sunday morning, as Gazan terrorists pummeled Israeli towns with projectiles and Israel responded with hundreds of airstrikes over the weekend. The man, in his 60s, was declared dead after being rushed

In a Stunner, Country House Wins Kentucky Derby via Disqualification

LOUISVILLE, Ky. (AP) — Maximum Security led all the way in the Kentucky Derby on Saturday, only to become the first winner disqualified for interference in the race’s 145-year history. After a long wait, 65-1 shot Country House was declared the winner. Source link Veterans In Defense Of Liberty - Vidol