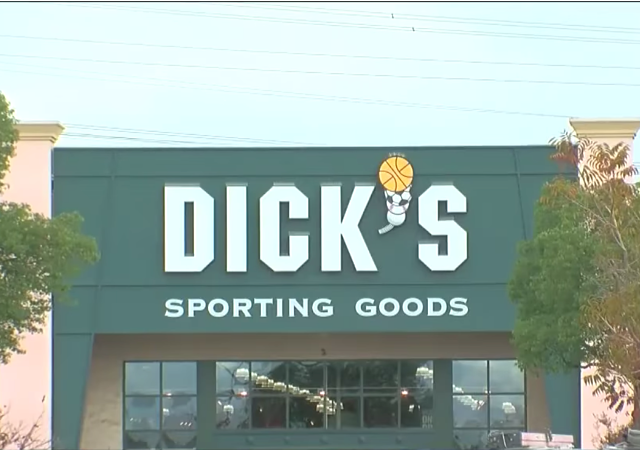 Dick’s Sporting Goods announced in late February of last year that they were banning high capacity magazines from all of its stores, banning the sale of assault-style weapons, and imposing an age requirement of 21 on the purchase of firearms in its stores.  The move has reportedly cost the sporting goods giant $150 million in sales for 2018.

For the last year we’ve been reporting on the bizarre saga of Dick’s Sporting Goods’ transformation from a relatively functional purveyor of mainstream sporting goods to a groveling symbol of modern corporate virtue signaling. On Friday, new evidence emerged of just how much that crusade has cost the retailer.

. . . . Dick’s CEO Edward Stack – with evident pressure from the media and anti-gun lobby – has embarked on an escalating series of policies to restrict the chain’s sale of guns, at one point a significant part of the company’s revenue stream.

Whether Stack had a sincere change of heart on the morality of his business model or whether he naively sought to protect his company with a futile attempt to appease a frothing mob that hates guns and capitalism with equal fervor is anyone’s guess.

But Stack went so far as to formally collaborate with the Michael Bloomberg-funded Everytown for Gun Safety and to sign a letter endorsing gun control bills pending on Capitol Hill. His company even retained corporate lobbyists to press Congress for additional gun control.

Needless to say, these moves resulted in Dick’s becoming synonymous with Benedict Arnold in the minds of well-informed Second Amendment supporters. Shoppers and major suppliers in the pro-gun community stopped doing business with Dick’s.

Now Bloomberg’s own media outlet, Bloomberg.com, is reporting that Dick’s itself estimates the price of its anti-gun advocacy at $150 million in lost sales in 2018, or almost 2% of the company’s annual revenue.

The losses, though, have not dented Stack’s anti-gun fervor, and he told Bloomberg News that “it’s worth it.”

At the time, Dick’s was a major seller of firearms. Guns also drove the sale of soft goods—boots, hats, jackets. What’s more, Stack, the retailer’s chief executive officer, suspected the position could drive off some of his customers on political principle.

He was right. Dick’s estimates the policy change cost the company about $150 million in lost sales, an amount equivalent to 1.7 percent of annual revenue. Stack says it was worth it.

“The system does not work,” Stack said. “It’s important that when you know there’s something that’s not working, and it’s to the detriment of the public, you have to stand up.”

Indeed, Stack is doubling down on his standing up against gun rights.

Stack’s not finished, though. For almost a year, Dick’s has been working with Glover Park Group to lobby for gun reform. Last month, Stack was one of just four CEOs to sign a letter supporting a universal gun control bill that recently passed in the house, and he recently joined the business council of Everytown for Gun Safety, a non-profit that advocates for gun control. (Everytown was founded by Michael Bloomberg, owner of Bloomberg News parent Bloomberg LP.)

Bloomberg also has an interesting analysis of boycotts vs. buycotts.

Some people applauded the CEO’s decision and promised to show their appreciation with their business—a phenomenon called “buycotting”—but those people didn’t stick around. “Love is fleeting. Hate is forever,” Stack said.

What happened at Dick’s confirms new study results out of Stanford University. Respondents said they were more likely to buy a product to support a CEO’s political stance than they were to boycott in disagreement, but their actions revealed the opposite. When asked for specific examples, 69 percent could name a product they’d stopped buying, and only 21 percent could recall a product they started buying.

This rings true to me unless a product one is buycotting is completely delicious and fabulous like Chik-Fil-A.

An Idaho woman is accused of fraudulently taking more than $35,000 worth of food stamp and Medicaid benefits for kids who were not under her care for four years. Source link