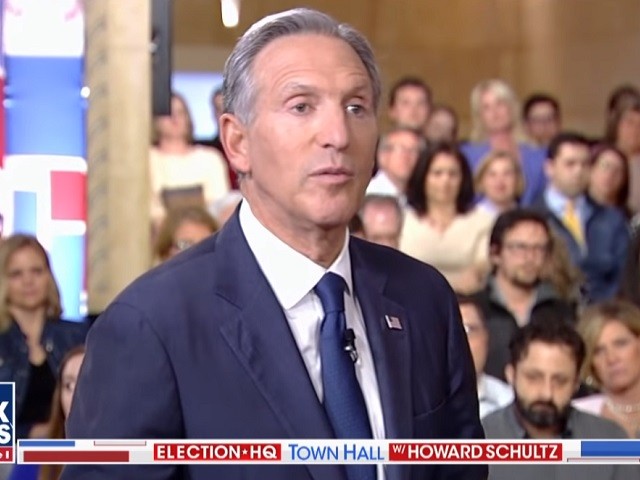 Thursday during a Fox News Channel’s event, former Starbucks CEO Howard Schultz, a potential independent candidate for president in 2020, offered his thoughts on immigration and border security when asked how he would deal with the two political parties in power.

Schultz said the reason Congress and past presidents had been unable to get substantial immigration reform passed was that the opposition party did not want to give the president in power a victory.

The former Starbucks CEO argued that President Donald Trump and Republicans were right on border security. However, he criticized them for the handling of DREAMers.

QUESTIONER: How would you characterize the situation at our southern border and immigration system overall? And whatever level of urgency you describe it, what specifically would you do in order to solve it and, particularly in your case, if you were to win the White House, you would be a third-party candidate, how would you work with the two parties in order to implement what you’ve got in mind?

SCHULTZ: Yes. So given the – what’s happening at our southern border, this is such an important question. I think it’s a question of humanity, and certainly a question about legal immigration. I want to say a few things in order to frame the – frame my answer. I don’t know how many people are aware in this audience but President Bush, 43, and President Obama both, while they were president, submitted to Congress an immigration bill. In both cases, the opposition took that bill, rejected it and would not pass it.

Now, if I took those two bills today and I showed everyone in this audience, this is one bill with – and this is the other, aside from President Bush’s bill, which had a guest worker program, no one in this audience would be able to tell Republican vs. Democrat.

Now, in terms of the answer to the question, I have gone down to the southern border, to McAllen, Texas, I’ve seen it firsthand. And I want to say what I — I want to share with you what I saw. And what I saw in my mind is a fracturing of American values and a fracturing of humanity. We should not be stripping mothers and fathers from their children. And we should not do anything that even comes close to what happened a long time ago where we put people in internment camps. That’s what it reminded me of.

Now, the issue that we have to recognize is this. President Trump is correct, and the Republican leadership is correct that we need fierce, strict levels of control on that border to keep bad people from coming in. Illegal immigrants should not come in. I don’t want to get into a wall or anything, but I agree we should fund whatever we need to do to secure the border. I get that.

Now, the humanity issue – no, one more thing. The Democrats are not correct. We should be funding ICE and giving them all the tools and resources they need to secure the borders and arrest the bad people. Whatever they need, give them all the resources.

But when it comes to the DREAMers, this is where I have a problem with the Republicans. Our country is based on immigration. Almost everyone in this room is here because someone came before us. In my heart, the DREAMers should be given a pathway to immigration.

Now we have the second issue, 11 to 12 million people are here unauthorized. What should we do with them? Many of them are here because they came here and their visa expired. They didn’t cross the border. We just need a better visa process. We’re not going to send 11 million people back. Now, it takes seven years to get a green card and get legal immigration, become a citizen. Let’s find a pathway for them. And then lastly, lastly, the Republicans and this president has weaponized this issue as has the Democrats.

In my heart, I believe they would rather have this has an issue to fight over than to solve for the American people. Now –

BAIER: Let me just finish to his point, it is a crisis. Is that what you’re calling it?

SCHULTZ: It is a crisis, but it can be solved. It cannot be solved currently, because of the ideology of both parties. But if I was fortunate enough to become president, this is what I can promise you. I’m about accountability. I’m about results. I would bring the people into the room.

The problem that we have with both parties — the American people are not in the room. I’ll tell you who’s in the room, self-interest, ideology, self-preservation and their ability to get re-elected. They spend more time on both sides raising money to get re-elected than they do solving our problems. It’s time to change.

Retailer Target Corp. is raising starter wages to $13 per hour, marking a continued rise in blue-collar wages amid President Donald Trump’s “Hire American” economic policy. In 2017, the company predicted it would raise starting wages to $11 per hour. But in March 2018, growing competition for workers forced it to

There are arguments over spending, and all manner of other issues. But the 70-year-old alliance has seen bad times before. Source link Veterans In Defense Of Liberty - Vidol