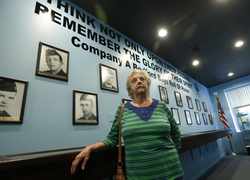 Seventy-five years ago today, Company A of the 116th Infantry Regiment of the U.S. Army’s 29th Division reached Normandy’s coast. They were part of a huge Allied force landing on a shoreline that stretched for 50 miles. Military planners had designated five landing sectors, starting with Sword Beach on the east, which British troops were assigned, all the way west to Utah Beach, assigned to the Americans.

In-between were Juno Beach (Canadians), Gold Beach (British) and Omaha Beach. Assigned to the Americans, Omaha was where the fiercest fighting would take place. It’s where Company A, composed mostly of National Guardsmen from central Virginia and New York, were headed.

Among the troops who fought at Normandy on June 6, 1944 were 33 sets of brothers, including three from Bedford and its surrounding farms: 24-year-old Sgt. Henry Clyde Powers and his younger brother, Jack G. Powers; 24-year-old twins Roy and Ray Stevens (and their brother-in-law Grant Yopp), and the two Hoback boys, Raymond and his brother Bedford, who had the same name as the town. Also in action, numerous cousins and uncles and nephews.

By the end of “The Longest Day,” all of their families — and nearly everyone else in Bedford — would have cause to grieve.

The men from Bedford hadn’t originally expected to see combat. As historian Alex Kershaw wrote in his superb book on the Virginians, the local National Guard outfit they’d joined in the late 1930s was more akin to a social club than an actual Army unit.

“We were one big family,” Roy Stevens told Kershaw decades later. “We’d dated each other’s sisters, gone to the same schools, played baseball together, sometimes using a golf ball we wrapped up. And we were so young!”

Although only five years older than the Stevens twins, Company A commander Taylor Fellers had a pretty good grasp of the hellish ordeal his men would face on D-Day. Before leaving England, 29-year-old Capt. Fellers had been briefed on the invasion plans and realized the acute dangers of Omaha Beach. He and his men were going in first.

Fellers confided his fears to a 28-year-old fellow soldier from Bedford, his cousin Lt. Ray Nance. After Fellers spoke, the two men gazed silently out to sea. “We stood there awhile,” Nance remembered. “We didn’t say a word, not a single word to each other. I guess we’d said it all.”

Aboard the troopship Empire Javelin, the Stevens twins had an even more unsettling farewell. They were usually inseparable and planned to remain so the rest of their lives. They’d even bought a farm together back home. But on D-Day they’d been assigned to different landing craft.

As Roy headed for his boat, he spotted Ray waiting his turn. Ray, who had strong foreboding he wouldn’t survive the invasion, struck out his hand out for his brother to shake. Roy, who was confident he’d survive the war, found the gesture overly melodramatic — and refused his brother’s hand. “We’re going to get through this all right,” he said. “I’ll shake your hand at the [planned rendezvous point] in Vierville.”

Each brother’s premonition proved correct. Roy’s landing craft struck an underwater object, sinking it and sending several men into the sea. Six of them drowned. Although he couldn’t swim, Roy managed to stay alive with the help of his floatation vest and assistance from Clyde Powers, a former lifeguard back home. They were in the water for an hour when a retreating boat picked them up and returned them to the mother ship. Clyde and Roy finally made it ashore four days later, only to find that their brothers had already been buried.

The first Bedford Boys on the beach had little chance. Hampered by cloud cover, the aerial bombers had dropped their ordnance too far inland. Many of the Sherman tanks that had been ferried across the channel and were supposed to provide cover at Omaha Beach were offloaded too far from shore and sank — with their crews trapped inside.

German gunners killed Ray Stevens, and Fellers, too. Both Hoback boys were cut down minutes after they waded ashore. So was Grant Yopp, who’d turned 21 a week before. Grant was married to a sister of the Stevens twins, but he was like a third brother to them: He’d lived with the Stevens family since he was 13 when his own father abandoned the Yopp family.

Bedford’s best all-around athlete, movie-star handsome Frank Draper Jr., was mortally wounded in his boat. Elmere Wright, whose promising career as a pitcher in the St. Louis Browns farm system had been interrupted by the war, was killed by the same German artillery shell that ended Bedford Hoback’s life. When another Bedford boy, Pvt. James Padley, was thrown into the sea, he was compromised by the radio strapped to his back and sunk beneath the waves. Padley’s body was never found. Nor was Raymond Hoback’s, although a G.I. found his Bible in the water and mailed it to his mother. She cherished it all her life.

Of the 34 men from Bedford who crossed the English Channel the night of June 5, 1944, 19 died on Omaha Beach, most of them within the first 15 minutes of battle. Four others died later in the invasion.

These men who died on the Normandy shore — or trying to reach it — were among the 4,413 Allied military men killed on D-Day, 2,500 of them Americans. It wasn’t only Bedford that suffered, even in central Virginia: Eight men in the 116th Regiment from Lynchburg didn’t survive D-Day. Seven from Roanoke never came home.

But as Alex Kershaw pointed out, no community in Virginia or anywhere else in America — or, for that matter, in any Allied nation — lost as many of its sons as Bedford. Taylor Fellers’ fears had come true.

“In a matter of minutes,” Alex Kershaw wrote, “a couple of German machine gunners had broken the town’s heart.”

Carl M. Cannon is the Washington Bureau Chief for RealClearPolitics. Reach him on Twitter @CarlCannon.

Share This Post
Like it? Vote it up!
00
Previous ArticlePresident Trump Open to 'Think About' Suppressor BanNext Article'I Was Shaking': D-Day Battle Still Fresh 75 Years Later
You May Also Like
WATCH: Cyclist Slaps Fan Who Knocked Him Off His Bike During Race
June 2, 2019

The Republicans Are Dead to Planet Earth
May 16, 2019
Stunned Steve Kornacki Takes Over Moments After Chris Matthews’ Abrupt Resignation
March 3, 2020
Rep. Ilhan Omar: United States ‘Bullying’ Led to Collapse of Socialist Venezuela
May 1, 2019
The Emergency That Is the Trump Presidency Continues
March 23, 2019
Trump To Lead Fight Against Socialism
April 2, 2019

The invasion, code named 'Operation Overlord'A but known by many todayA as 'D-Day,'A nearly turned out to be a massive and embarrassing disaster. Source link Veterans In Defense Of Liberty - Vidol

During a guest appearance on Good Morning Britain President Donald Trump expressed willingness to "think about" banning suppressors in the U.S. Source link Veterans In Defense Of Liberty - Vidol