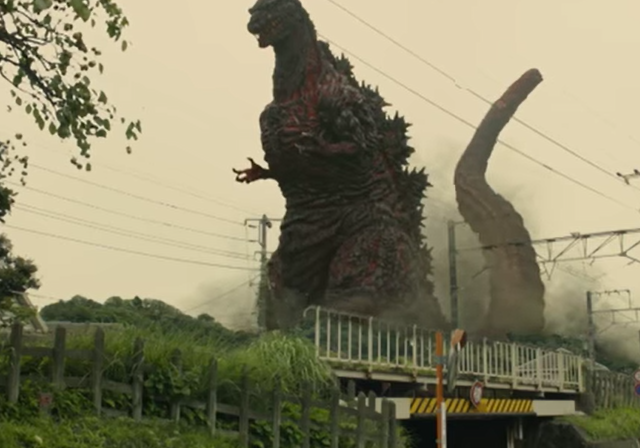 One of the final lines in 2016’s Godzilla: Resurgence is a quiet and somber reflection that Godzilla is “something we’ll have to learn to live with.” In the final images of the film, we see the figure of Godzilla standing above the Tokyo skyline, a stone creature having been defeated but now made immobile via the coagulants floating in his bloodstream having shut down his nuclear core.

These are powerful words given what the monster in question has done and what he represents. He’s the embodiment of post-Fukushima meltdown fears that the Japanese public holds against Nuclear power and the dangers it represents. The fact that the movie ends on that quote is an incredibly powerful message given the preceding film.

At the height of the monster’s violent rampage against modern day Tokyo, the creature was breathing fire and plasma that had lit the heart of the city on fire. It had irradiated the city so heavily that nothing was going to be able to survive there for years. It’s a weirdly uncomfortable and disturbing scene for a franchise that normally makes its destruction of major cities a silly joke.

Just like the real Fukushima meltdown, the movie recognizes that nuclear power isn’t just a laughing matter. There is a very real risk of using a power source that can meltdown if improperly used and irradiate enormous sections of populated land. Yet pound for pound it’s also the safest and cleanest form of energy available in the world today. The movie stating that it must be “lived with” is a bold statement that asks it’s audience to be braver.

The Politics of a Godzilla Attack

One of the most interesting aspects of the film is the way it depicts the politics of a disaster. The movie takes a decidedly satirical edge against the notion of bureaucracy quite early in the film. From the very start of Godzilla’s rampage, the government’s first response is to break down into meeting after meeting, consulting experts, and receiving approval from multiple points of power. It’s an utter condemnation of government bloat that this monster wasn’t even engaged by the military until hours after it started. Even then it’s forced to back down at the mere notion engaging could accidentally hurt civilians.

This last detail isn’t Japan’s fault of course. Japan isn’t allowed to engage in warfighting under its post-war constitution. The country ultimately is forced to rely on foreign intervention the escalates Godzilla into mutating into a much more dangerous creature that causes significantly greater damage.

The movie is a scorching critique of government bureaucracy and it’s mere ability to handle disasters. In the end, all they’re able to do is stabilize the situation enough to avoid having the United States nuke Tokyo. This movie is a harsh series of lessons that it’s very clear that many prominent American politicians haven’t heeded.

There’s no shortage of hate nowadays on the right for Alexandria Ocasio-Cortez’s Green New Deal. Beyond even the cursory embarrassing lines about “cow farts” and banning airplanes, her proposed resolution for how to direct the country’s attention would’ve involved a total restructuring of the energy grid, phasing out fossil fuels, requiring every building in the country be retrofitted and

Surprisingly, the plan involved completely obliterating nuclear power and fracking. Fracking is, of course, the left’s favorite power source to hate on (as seen in Matt Damon’s propaganda piece Promised Land). Nuclear power is less hated on the left although Obama-era restrictions on nuclear destruction did hamper the production of new plants.

The leftist allergy to nuclear power is unreasonable. It’s the only carbon neutral power source widely available and it’s despised by members of the green left in favor of less efficient sources. People treat nuclear power like it causes the three-eyed-fish from The Simpsons to materialize in close proximity but that’s not true. Power plants have a historically positive record with only three failures on record (two of them being non-lethal and the third being ridiculous if you look up the details of what the Soviet scientists were doing to it).

It’s amusing that everything AOC proposed in her signature legislation was obliterated by this Godzilla movie two years before she was even elected. She wants to save the world through committees and by banning already accessible power sources. Maybe its a symptom of her egotistical power trip or maybe she really is just ignorant on the dangers of her agenda but you don’t save the world by banning available clean technology. You just make yourself into “the boss” that way.

Democrats Keep Picking the Losing Side on Issues
July 14, 2019