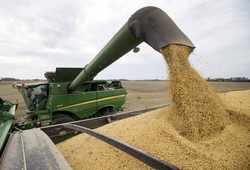 There’s no question that many farmers are struggling this year with incomes down and bankruptcies up. Though some of the more dire reports on the farm sector recorded in the media are exaggerated, what is indisputable is that prices for major commodities such as corn are on a downward trend and are significantly lower than they were less than a decade ago, when prices were at or near record highs.

It’s natural to blame any declines in the farm economy on the tariff war with China. The trade dispute has certainly hurt the farm sector as the higher Chinese tariffs on American agriculture has reduced demand for their crops — especially the Farm Belt states of the Midwest. Even President Donald Trump himself has admitted that the trade war has hurt farmers, which is why he wants to send some of the money raised by his tariffs to the farmers directly.

But something else is going on here that is negatively impacting the farm states that existed before any trade war. The daily headlines of a tariff war have overshadowed what might be an even bigger and longer-term problem for farmers: tight monetary policy at the Federal Reserve, which has squeezed commodity prices across the board.

Over the past year, an index of all commodity prices — including everything from oil to copper to timber to soybeans — has recorded a price reduction of roughly 10%. Eight of the 10 major agriculture commodities have been falling in price. Why is that happening? It isn’t good weather or bumper crops, because the losses are being felt across regions and hitting almost all the major crops. One explanation for the farmers’ woes is tight money.

We know from historical experience that when money is loose and the printing presses shower the economy with cheap dollars, commodity prices soar, as in the 1970s, when grocery bills soared. When money is excessively tight, as it is now, commodity prices fall. When almost all of the commodities — from corn to copper to timber — start to fall in price at the same time, it is a pretty good signal that our monetary system is out of whack.

Farmers are often the frontline victims of commodity deflation. The extreme example, of course, was the Great Depression, when farm bankruptcies skyrocketed. With thin profit margins to begin with in a highly competitive global food market, many farmers are being unnecessarily hurt by having to swallow an 8% reduction in prices (following a similar decline last year).

Of course, free markets, not government subsidies or Fed monetary policy, should determine which farmers should stay in business and which will fail. The way to reduce artificial price fluctuations in the agricultural sector of our economy and get quick relief for our farmers is for the Fed to increase dollar liquidity into our high-flying American economy. This would be an effective and overdue way for our nation’s farmers to experience greater profits.

This reflation policy makes sense now given that the threat of economy-wide inflation at this stage is minimal to nonexistent. The dollar is strong thanks to world demand for dollars, and the growth in output due to tax cuts and deregulation is pushing out the supply of goods and services — which is deflationary, not inflationary.

There isn’t a whiff of inflation in consumer prices (except for education and health care). The Wall Street Journal reports that the Fed has undershot its inflation target (2% growth in the consumer price index) for four months running. The Fed is hesitant to cut interest rates because it believes wrongly that a booming economy causes inflation — which is a long ago dead Keynesian idea.

A modest reflation would put some extra juice into the farm sector.

This would put added pressure on the Chinese to make a deal with the Trump administration. That deal would press for the elimination of China’s punitive tariffs on our farm products and open up markets to other Made in America products.This would also counter the brazen Chinese strategy of meddling in American elections by intentionally targeting tariffs on farm products produced by rural voters in key battle ground states in the 2020 elections.

America has the most productive farmers in the world, so a trade agreement that ratchets down tariffs on both sides of the Pacific would greatly benefit the Farm Belt. Combining that with a monetary policy by the Fed that allows the economy to continue to grow without inflation would help our farmers and workers across all industries and without one dime of taxpayer assistance.

Stephen Moore is a distinguished visiting fellow at the Heritage Foundation.

Share This Post
Like it? Vote it up!
00
Previous ArticleGibson’s Bakery v. Oberlin College – Trial Day 11 – Don’t let them eat Gibson’s cakeNext ArticleTruth Be Told… He Nailed It!
You May Also Like
Fox News Poll: 47 Percent of Americans Back Trump Impeachment
July 28, 2019
WATCH: Cyclist Slaps Fan Who Knocked Him Off His Bike During Race
June 2, 2019
Exclusive — Burgess Owens on Reparations: ‘Every Bad Thing That’s Happened to My Race Over the Years’ Goes ‘Right Back to the Democratic Party’
June 20, 2019
Trump Campaign Staffer Attacked for Calling 9/11 Terror Supporters 'Murderous Thugs'
May 11, 2019
Watch Live: Trump Delivers Remarks on Census Citizenship Question
July 11, 2019

No Defense for Trump After Diplomat's Testimony
October 24, 2019

Truth Be Told... He Nailed It!

Truth Be Told... He Nailed It! View Reddit by M_i_c_K - View Source

Today was Day 11 of witness testimony in Gibson Bros. v. Oberlin College. The events giving rise to the lawsuit have been said to represent “the worst of identity politics.”  You can read about some of the background on this case here. Dean of Students and Defendant Meredith Raimondo Oberlin College Dean of