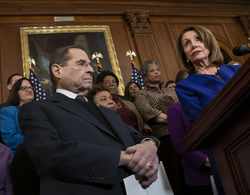 As a vocal faction of House Democrats tries to pressure Speaker Nancy Pelosi into supporting impeachment of President Trump, it is getting reinforcements from left-leaning pundits who contend that Pelosi’s political calculations don’t add up. They generally argue that acting upon the moral imperative of impeachment is more likely than not to yield political dividends.

The debate over impeachment is mostly about politics, and not legalities, because of the high improbability that 20 Senate Republicans would ever join their 47 Democratic and Independent colleagues in convicting and removing their party’s standard-bearer. Granted, not everybody concedes conviction is impossible. Some point to the example of Watergate, such as The Atlantic’s Yoni Applebaum: “The process of impeachment itself is likely to shift public opinion, both by highlighting what’s already known and by bringing new evidence to light. If Trump’s support among Republican voters erodes, his support in the Senate may do the same. One lesson of Richard Nixon’s impeachment is that when legislators conclude a presidency is doomed, they can switch allegiances in the blink of an eye.”

In the words of “Dumb and Dumber’s” Lloyd Christmas, “So you’re telling me there’s a chance!” Sure, there’s a chance. But after so many scandalous shoes have dropped, it’s hard to imagine another shoe so heavy that it would actually catapult Republicans, who today compose a far more ideologically purified party than Nixon’s, into the impeach-and-convict column.

That’s why most pro-impeachment advocates concede that conviction by the Senate is not the objective. Instead, they argue impeachment will benefit Democrats politically. The New York Times’ Michelle Goldberg warned, “Following public opinion on impeachment, as opposed to attempting to shape it, makes [Democrats] look weak and vacillating. Endless calls for further investigation send the message that the staggering corruption and abuse of power that Trump has already engaged in is somehow tolerable.” Similarly, The New Republic’s Matt Ford insisted, “Nothing could make Democrats look weaker than spending the next two years warning that Trump is an existential threat to American democracy, then telling voters that it’s not worth the trouble to impeach him.”

Another common argument is that current polling showing strong majorities against impeachment should be ignored, since it doesn’t account for how the impeachment process would impact public opinion. “[T]he argument that this would hurt Democrats — or even just that it would be more likely to harm than help — is based on plenty of guesswork,” said The Washington Post’s Aaron Blake.

Fair enough. But the argument that impeachment is more likely to help than harm is based on more guesswork.

Impeachment doesn’t just poll poorly; it polls poorly even though most Americans already believe Trump has committed crimes. In this month’s Quinnipiac poll, 57% say Trump committed crimes before he became president, and 46% say he has committed crimes while he was president. Yet a paltry 29% support the mere “begin[ning of] the process to impeach President Donald Trump.”

Clearly, there is a bloc of voters who believe Trump committed crimes yet blanch at impeachment-and-conviction. It’s an assumption without evidence that an impeachment inquiry will produce evidence of crimes not yet already presumed by most voters, and yet another assumption that any such evidence would move the public opinion needle. With the House Democrats’ caucus spanning a wide political spectrum, including democratic socialists from deep-blue districts and moderates from Trump-won districts, impeachment risks dividing Democrats while uniting Republicans.

Remember, if your end goal isn’t removing Trump by Senate conviction, but by the ballot on November 3, 2020, then you want to pursue political strategies that unify the anti-Trump majority. Trump only got into the Oval Office in the first place because the 54% of the voting public who opposed Trump (not to mention Trump critics who didn’t bother to vote) didn’t fully consolidate behind the Democratic alternative. Trump has yet to achieve majority support for his job performance in the RealClearPolitics poll average throughout the duration of his presidency, but what splintered before could splinter again. It’s true that we can’t know for sure how impeachment would alter public opinion, but since there is no current evidence that impeachment proceedings would help unify Trump opponents, why make a blind bet?

Impeachment advocates assert that impeachment would make Democrats look strong and principled by trying to uphold the rule of law. But consider what the Trump counterargument would likely be. As Trump posted on Twitter earlier this month: “Dems can’t win the election fairly. You can’t impeach a president for creating the best economy in our country’s history.”

This is the kind of illogical, disingenuous non sequitur from Trump that drives Democrats mad. But however crudely the message is constructed, so long as the unemployment rate stays low this is a strong general election message for Trump: Democrats can’t touch me on the economy, so they want to distract you with an impeachment fight. In a choice between upholding one’s own bank account or the rule of law, a lot of people will choose their bank accounts.

This is why scandal politics often backfires on the opposition party. Those pushing a scandal narrative against their opponents, regardless of the legitimacy and the severity of the alleged scandal, don’t necessarily look principled, but self-serving — trying to score political points instead of articulating how they will make voters more prosperous and safe. And so, Iran-Contra did not give us President Dukakis. Abu Ghraib did not give us President Kerry. Solyndra and Fast & Furious did not give us President Romney. (Yes, George W. Bush won the presidency two years after the Bill Clinton impeachment, but the Supreme Court and Ralph Nader both played a role in that.)

Does that mean Democrats should cowardly ignore Trump’s transgressions? No. Democrats do need to build a political case for ousting Trump even if the economy is strong, and his devious, divisive and destabilizing behavior is the obvious place to start. It’s just doesn’t automatically follow that impeachment proceedings are the best way to make that case.

Here’s one alternative strategy: train the House Democrats’ investigative and oversight powers not on Trump’s 2016 campaign, his tax returns, or even the allegations of obstruction of justice but on how Trump is actually governing. Expose how the Trump administration spends much of its time lining the pockets of the president and his cronies, instead of looking out for the American people.

We could be learning more about allegations of Trump trying to steer a border wall contract to one Republican donor; Trump leaning on the Japanese government to help another donor get a new casino built; Mar-a-Lago and other Trump properties being used to sell access to Trump; and foreigners illegally donating to Trump’s inauguration committee. There are reports of Commerce Secretary Wilbur Ross failing to divest assets that may constitute conflicts of interest. A formal ethics inquiry into potential conflicts of interest by Interior Secretary David Bernhardt was opened four days after he started the job.

This is not an exhaustive list of alleged unethical behavior in the Trump White House. Yet all such stories are relegated to the back pages of our newspapers and our minds, as we can’t look away from Mueller report. But House Democrats could be digging deeper into these matters and trying to shift our attention. With every new bit of evidence revealing unethical behavior, Democrats can develop a narrative of how executive branch officials are expending their energies to enrich themselves and their pals, not the American people. And this can be done without an impeachment inquiry, just old-fashioned hearings and reports.

Showing Trump isn’t working on behalf on the public would bolster the Democratic contention that he merely inherited a growing economy from Barack Obama and doesn’t deserve any credit for the continued upward trajectory. Successfully robbing Trump of his best argument is a better bet to unify the anti-Trump majority than a divisive impeachment battle.

A House impeachment and a Senate acquittal (or a Senate refusal to hold a trial), followed by a Trump re-election, does not hold him accountable for anything.

Without an open-minded Senate, the only way Trump is ultimately held accountable is if voters choose to do so on Election Day. And without evidence-based confidence that impeachment will help the Democratic cause on Election Day, there is no compelling reason to roll the political dice.

Bill Scher is a contributing editor to Politico Magazine, co-host of the Bloggingheads.tv show “The DMZ,” and host of the podcast “New Books in Politics.” He can be reached at contact@liberaloasis.com or follow him on Twitter @BillScher.

Democrats Keep Picking the Losing Side on Issues
July 14, 2019
New Conservative Hire at CNN Demoted from Editor to Pundit After Pressure from Liberals
March 10, 2019

Why Are Dems Still Foot-Dragging on Impeachment?

AP Photo/J. Scott ApplewhiteWith parts of the House Democratic caucus pushing Speaker Nancy Pelosi (D-Calif.) to begin impeachment hearings, Rep. Hakeem Jeffries (D-N.Y.) appeared on NBC’s “Meet the Press” on Sunday to address the issue. Jeffries is one of the party’s rising stars, yet he still struggled to explain Democratic

Trump Let the Dogs Out

The Democrats, stumbling down the road to impeachment, were stunned by President Trump's executive order on Thursday. The order is in two parts. First, it directs the intelligence agencies to cooperate with Attorney General William Barr's investigation into the origins...Read Full Article » Source link Veterans In Defense Of Liberty -