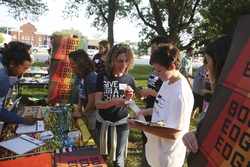 Are political activists lonely? Maybe. With so much acrimony in our politics today, one wonders why any young person aspiring to make the world a better place would choose politics over humanitarian or other nonprofit work. Why not work with groups producing tangible results, such as teaching schoolchildren or beautifying community parks, instead of a job that involves shouting at your Twitter feed and wondering who will stab your back tomorrow?

One reason young people get involved in politics might be loneliness. In a nationally representative survey conducted by the American Enterprise Institute, 18- to 35-year-olds who are lonely and socially active (it is possible to be both) choose to volunteer for political organizations and campaigns at seven times the rate of their peers who are not lonely (22% vs. 3%). Conversely, socially active young adults who are not lonely choose to volunteer for faith-based organizations at six times the rate as their lonely peers (24% vs. 4%).

Lonely, socially active young adults — defined as those who have multiple friends with whom they interact every week yet report high levels of loneliness — participate in nearly every type of political activity at considerably higher rates than those who are not lonely. This includes expressing support for a candidate on social media (51% vs. 33%) to displaying campaign posters and bumper stickers (30% vs. 18%). Ironically, the only activity in which non-lonely young adults outperform their lonely peers is in voting in elections. The lonely crowd is apparently better at telling others whom to vote for than actually getting to the polls themselves.

Partisanship plays no role in this phenomenon. Whether you are a Democrat or Republican, if you are young and socially active, your loneliness level is a better predictor than your political ideology of whether you will choose to get involved in politics instead of some other community-based activity.

Lonely young adults attracted to politics seem much less enthused about community-based civil society — the part of the private sector endeavoring to address public challenges with non-governmental resources. Perhaps unsurprisingly, they balance out their low view of civil society with a higher view of government.

The picture that emerges of socially active young adults suggests that politics fulfills the tribal needs of lonely individuals more than it does for those who are not lonely. The latter group generally has a higher opinion of all sorts of community institutions. This may be because their lack of loneliness is directly attributable to their embeddedness in richer local networks. For lonely young adults, politics provides the sense of purpose and mission that their non-lonely peers get from church, their favorite local charity, or their kids’ school.

Share This Post
Like it? Vote it up!
00
Previous ArticleSupreme Court Justices Should Have Term LimitsNext ArticleFalling for Racist Hoaxes Is a Symptom of Self-Loathing
You May Also Like
Democrats Are Clueless When It Comes to China Policy
May 18, 2019
Report: Democrats to Condemn 'All Hate,' Not Anti-Semitism Specifically, in Resolution
March 7, 2019

What a Successful Trump Strategy on Iran Must Include
September 17, 2019
Schiff: Had I Known About the FISA Abuse, I Would Have Called Out the FBI
December 15, 2019

Biden Stuck in Past When It Comes to Climate Change
May 13, 2019

Falling for Racist Hoaxes Is a Symptom of Self-Loathing

Americans fall for countless hoaxes primarily because they falsely believe America is not a very good place. In some sense, this is egotism. Source link Veterans In Defense Of Liberty - Vidol

The court has a historic lack of turnover that allows justices to often serve past their prime, which has eroded the institutional integrity of the Supreme Court, write Kermit Roosevelt and Ruth-Helen Vassilas. The best solution is to create Supreme Court term limits by statute.Read Full Article » Source link Veterans