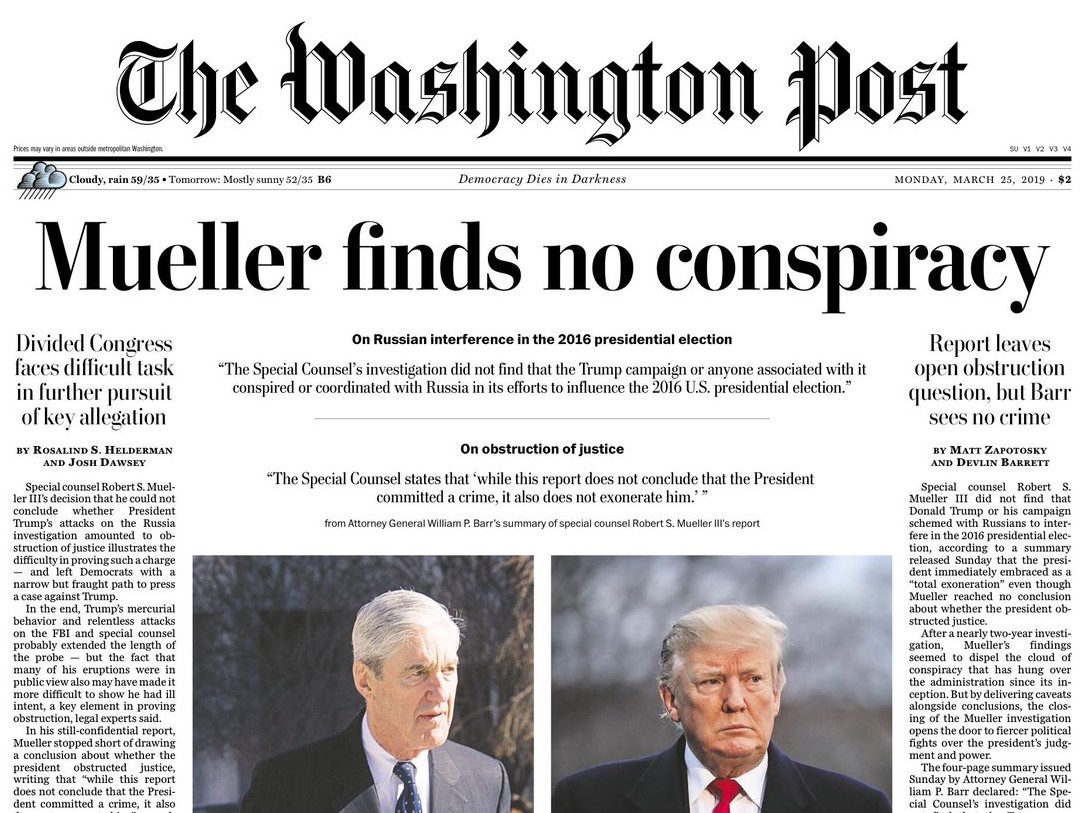 Why did the press think the day of reckoning would never come for them?

Yesterday it was all about the Mueller report and the Barr letter.

Today the news and commentary seems to be focusing more on the press itself: will the MSM ever own up to the magnitude of their mistake/lies (I very much doubt it)? How much has their coverage of Russiagate damaged their reputation, and with whom? And do they even recognize how much this has damaged their reputation? What will their next move be?
And on and on and on—for a few examples, see this, this, this, this, and this from Matt Taibbi (who is most definitely not a Trump-supporter in any way). And the MSM tries gamely but ridiculously to defend itself here, here, and in what is perhaps my favorite headline of all: “Trump Is Bullying the Media Into Falsely Exonerating Him of Russia Corruption.”

But the question I want to tackle right now is why did they do it? Why the nonstop incessant seemingly-interminable beating of the “Trump is guilty of collusion and there is evidence” drum? Why did the media stick their collective necks out on such shaky-to-nonexistent evidence, knowing how tenuous it was, and that the day of reckoning might indeed come?

I offer the following reasons, not mutually exclusive (although some are):

(2) It was a kind of political tulip mania, a contagion that spread throughout their ranks, a wishful thinking squared and then cubed.

(3) They didn’t think of the future at all. There was only the eternal-seeming present, in which this story fed their own Trump-hatred and drove ratings. Their audience craved it, and so did they.

(4) They figured that if the day of reckoning and Trump’s exoneration ever came, they could spin it to their advantage (or at least deflect it), as they had done so many times before with so many other stories.

(5) They thought Trump would make many many more missteps, and one of those missteps might intervene to cause his downfall independently of this. And meanwhile, they had a great and ongoing story to keep them going.

(6) They were gearing this to Congress, and thought that a combination of all the Democrats and a significant number of Republicans would believe the story and impeach Trump or even impeach and convict him, even before Mueller was finished.

(7) I actually think this last one is the most important: Watergate.

Watergate turns out to have been the worst thing that ever happened to the press in my lifetime, although they probably think it was the best and the high point. It gave them not just delusions of grandeur but an actual example of their power to bring down the mighty with their metaphorical pens instead of swords.

Watergate was many things, but one of them was a triumph for the press. The press hated Nixon prior to Watergate, and in Watergate several elements came together: an actual wrongdoing with actual evidence of related wrongdoings by the president, an FBI informant with his own agenda, a GOP willing to take the high road and convince its own president to resign or be thrown out, and a public unjaded by all that’s happened since.

The press also became heroes, not only in their own eyes but generally. A movie was made in which Woodward was played by Robert Redford in his handsome prime, and Bernstein was played by the less-comely but still very popular Dustin Hoffman. Who could ask for anything more?

Only a few of today’s journalists were around back then (except as little children), but you better believe that Watergate was not lost on them nor was it lost on their professors at journalism school or school in general. The narrative was so compelling that I’m virtually certain that one of the main things that drove them in Russiagate was the desire for a repeat. They believed they had the ingredients, or at least the most important ingredients to them: a Republican president they hated, informants in the FBI and elsewhere, tales of secret machinations by the administration, and Republicans in Congress who they thought could be rather easily persuaded to turn on that president.

The fact that Russiagate was actually the un-Watergate probably did not even cross their minds. This was the reverse Watergate, the Watergate in which the president was not the perp, and the instruments of intelligence and justice were weaponized against him rather than that he made a blocked attempt to enlist them against his enemies. In the un-Watergate, the press – instead of being able to successfully cast itself as the bold uncoverer of the terrible truth about the president – has been revealed to have been mainly in the business of amplifying lies about the president.

[Neo is a writer with degrees in law and family therapy, who blogs at the new neo.]

Share This Post
Like it? Vote it up!
00
Previous ArticleWhy Should Anyone Trust the Dem Media Again?Next ArticleNew Jersey Gov. Phil Murphy: ‘I Look Forward to Signing’ Assisted Suicide Bill
You May Also Like
Trump’s Thuggish Threat of Violence Against His Critics
March 15, 2019

Why Should Anyone Trust the Dem Media Again?

So it was all fake news...The entire two-year Russia collusion frenzy was based on an absolute falsehood that Donald Trump and his team had colluded with Russians to fix the 2016 election. Source link