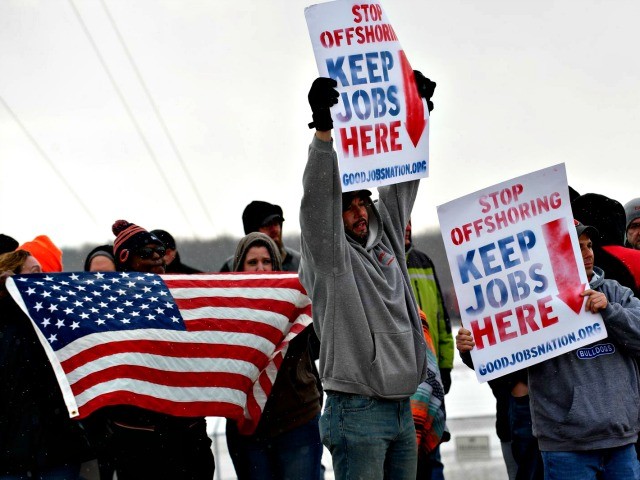 General Motors’ (GM) decision to close the Lordstown, Ohio, assembly plant this year is leaving the small community of Americans in disarray and more disaffected than ever before.

In a New York Times report, American workers who have been recently laid off due to GM’s closure of the Lordstown Assembly Plant say their community, families, and livelihood hang in the balance while the multinational corporation and its CEO Mary Barra carry on, unaffected. Also slated to close is GM’s Detroit-Hamtramck and Warren Transmission plants in Michigan and the Baltimore Operations plant in Maryland, a move that is expected to leave about 14,700 laid off in the U.S. and Canada.

Laid-off American workers explained to the New York Times the sense of anxiety that the mass layoffs have caused for the Lordstown community.

Laid off GM worker Jonathan Achey, 45 years old, said the closing of GM’s plant while Barra earns a nearly $22 million annual paycheck is a “smack in the face” to the corporation’s employees:

My whole life has been General Motors. I have 28 years invested in the company that is doing this to me. I understand it’s a business, and they have to make decisions when it comes to business. If this is what they feel they have to do, then I’ll have to accept it. But it’s hard when you see money going to other places, when you see C.E.O.s making the money they’re making. Do I feel like I got slapped in the face? Absolutely. It definitely feels like a smack in the face. But am I going to let that determine who I am after 45 years? No, I’m not. I’m not. I can’t, and I won’t. [Emphasis added]

Kesha Scales, a 22-year employee at GM’s Lordstown plant, echoed a similar sentiment, telling the Times that while this work is her and so many others’ livelihood, GM executives do not have that same loyalty:

The feeling in the plant my last day was eerie, because nobody knew what to say. That’s why I was so hellbent on trying to get out of there as fast as I could. I didn’t want to see that last Cruze — I just didn’t. I walked out, and I didn’t look back. I didn’t want to look back. I just kept saying to myself, “This is the last time you’re going to make this trip, from somewhere that you’ve been going for 22 years.” I was so loyal to G.M., but it’s just a game to them. [Emphasis added]

Ernie Long, a 41-year-old husband and father of two, explained how he had bought his property seven years ago, worked hard for those years and eventually was able to build a home for his family in the area. Now, two years after building his home, Barra “thinks we don’t need to sell the Cruze anymore,” Long told the Times.

The prospect of having to move away from his family just to find work is nerve-wracking, Long said:

If we have to move for work, I’ll have to go by myself. We’ve had the conversation. I wouldn’t say I’d be mentally prepared, but I know I’d have to leave. I would’ve liked to go to Toledo, or Parma, or Buffalo-Tonawanda. They’re all within about three hours — if I needed to come home that day, I could drive back. Whereas if I went to Spring Hill, that’s nine hours one way. Eydokia would still have her parents here to help her with the kids, and obviously I’d send money home. We would have to pay for rent there and a mortgage here; I’d have to move in with somebody. I still have work to do at my house; I still have a yard to put in. But how are you going to do that knowing you don’t have a job? [Emphasis added]

Cindy Higinbotham, a 13-year-old high school student in Lordstown, told the Times of her fears of having to move because her father, who has lived in the area his entire life, was laid off by GM.

“I’m scared about moving, but I’m trying to be brave about it,” Higinbotham said. “I know it’s going to be hard, because I’ll be going into a new school. I have to make new friends, and I’m not really social.”

Though Barra allegedly blamed union workers for GM’s close of the Lordstown plant in a conversation with President Donald Trump, negotiations between GM and the UAW detail how union workers were willing to accept nearly $120 million a year in concessions to keep the plant open. Still, Barra and executives moved forward with the plant’s closure.

While Americans are laid off en masse at GM, the corporation’s production in Mexico remains unaffected by any job reductions and has even announced additional production in China.

Experts have called on Trump to implement a 25 percent auto tariff to protect American auto worker jobs and the U.S. auto industry from Chinese domination. Likewise, Sen. Bernie Sanders (I-VT), vying for the Democrat nomination for president, has told Trump to immediately ban GM from receiving federal contracts for their outsourcing, offshoring, and mass layoff scheme.

GM is looking to manufacture an electric Cadillac in China and continue manufacturing its Envision compact vehicle in China. The made-in-Mexico Chevrolet Blazer will soon arrive in U.S. markets. Last year, GM became the largest automaker in Mexico as it has cut jobs in America and increased production in Mexico.

Share This Post
Like it? Vote it up!
00
Previous ArticleTrump Says He Will Hike Tariffs to 25% on China GoodsNext ArticleAmerican Democracy Is Broken, We Must Demand a Fix
You May Also Like
Biden Nominees Fall Prey to the Terrible Temptation of Twitter
March 27, 2021
This Is Just the Tip of the Impeachment Inquiry Iceberg
October 14, 2019

American Democracy Is Broken, We Must Demand a Fix

Trump Says He Will Hike Tariffs to 25% on China Goods

President Donald Trump said Sunday that he will hike the tariffs on $200 billion of imports from China to 25 percent from 10 percent on Friday. “The Trade Deal with China continues, but too slowly, as they attempt to renegotiate. No!” the president tweeted. The U.S. currently charges a 10 percent duty