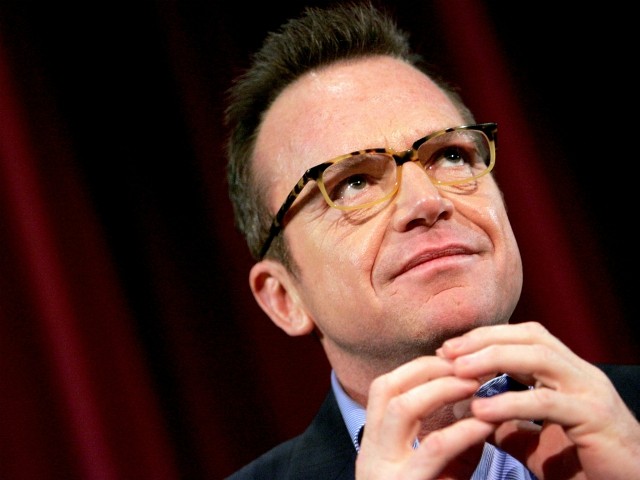 Far-left actor and anti-Trump resister Tom Arnold expressed his desire to stand over Donald Trump Jr.’s corpse in a Twitter thread featuring a photo of the elder Trump son trophy hunting, and standing over a dead elephant.

Arnold tweeted a photo of Trump Friday and wrote, “This is Donald Trump Jr. He is holding the tail of a beautiful African elephant he murdered as she got up from a nap. Donald Trump Jr. is the real piece of garbage.”

Pink Elephant author Rachel McKibbens remarked, “What a coward. Look at him standing there, alone, like everyone’s least favorite uncle.”

Tom Arnold replied, seeming to fantasize about his desire to stand over Trump’s lifeless body.

“Looking forward to the day I’m standing over him wearing my bullet belt & safari khakis, my cartoon sized Daniel Boone buck knife in one hand his his teeny tiny tail in the other,” Arnold wrote.

What a coward. Look at him standing there, alone, like everyone’s least favorite uncle.

Looking forward to the day I’m standing over him wearing my bullet belt & safari khakis, my cartoon sized Daniel Boone buck knife in one hand his his teeny tiny tail in the other..

The twisted fantasy comes hours after the True Lies actor publicly lamented the fact that neither Trump Jr.’s nor Eric Trump’s homes were robbed.

Don Jr’s NYC apartment has not been robbed yet! Eric Trump’s either! Really bad news!! https://t.co/eBr5tEwtZM

“No we just get daily death threats and exploding packages of white powder sent to our homes you piece of garbage,” he wrote in reference to the suspicious letter that was addressed to him last year, resulting in his ex-wife’s hospitalization.

“You are an awful person. This is why people hate you. You are getting what you deserve. So shut the fuck up,” the ominous letter read.

Thankful that Vanessa & my children are safe and unharmed after the incredibly scary situation that occurred this morning. Truly disgusting that certain individuals choose to express their opposing views with such disturbing behavior.

I was rushed to the hospital, evaluated and put on Cipro for the longest two weeks of my life. While they worked to identify whether the white powder was deadly, I spent the entire time thinking about the horrifying possibility that I would never see my five beautiful children again.

It was a cowardly act against a mother. And even today, every time I open the mail, I feel the same fear in my heart as I did that day. These recent acts are the acts of a coward and nothing more than terrorism, pure and simple. No one, regardless of political party or ideology, should ever have to go through what I went through.

Arnold’s tweet was still up as of 1:30 ET, but it remains unclear if Twitter will take action. Twitter’s safety policy states in part, “You may not threaten violence against an individual or a group of people. We also prohibit the glorification of violence.”

Will the media condemn Omar for her support of political violence?

RT so they can’t ignore! pic.twitter.com/43DTTrGWIV

Share This Post
Like it? Vote it up!
00
Previous ArticleREPORT: Three Dead in El Paso Walmart Shooting, Says El Paso MayorNext ArticleJoe Biden: 'I'm Against Any Democrat Who Wants to Get Rid of Obamacare'
You May Also Like
Watch Live: Trump Delivers Remarks on Census Citizenship Question
July 11, 2019

Joe Biden: 'I'm Against Any Democrat Who Wants to Get Rid of Obamacare'

Joe Biden escalated his opposition to Medicare for All and its proponents on Saturday, saying he was "against" any Democrat looking to scrap Obamacare. Source link Veterans In Defense Of Liberty - Vidol