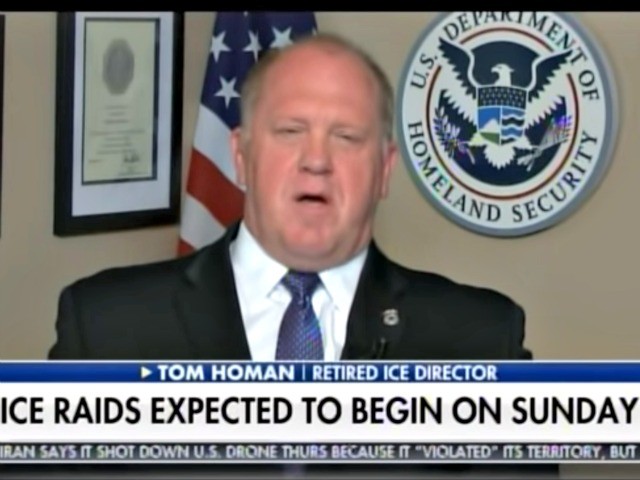 A partial transcript is as follows:

PETE HEGSETH: The president says if you’re a double law-breaker, you got to go. These mayors’ resisting, Tom.

You want to talk about the seperation of families? The separation of families are the angel moms and dads, who have been separated from their children forever because a criminal alien walked out of your sanctuary jail. Every one of those mayors ought to be ashamed. San Francisco, New York, Chicago. I can go on. Oakland’s mayor giving a heads up on a criminal operation. And they’re going to talk about ICE separating families? I’m disgusted. The story in the Washington Post especially got me off. The men and women of ICE deserve better than this.

JEDEDIAH BILA: Let’s look at what some of those mayors are actually saying. You have Oakland Mayor Libby Schaaf [who said] “know your rights and use your local resources. Chicago Mayor Lori Lightfoot [said] “CDP will not cooperate or facilitate any ICE enforcement actions.” And of course, my personal favorite New York City Mayor Bill de Blasio [said], “A sick plot to tear families apart and force immigrants into the shadows.” This is outrageous to me that they’re saying things like this. They make it as if they’re law abiding citizens. They came into the country illegally, who then defied the court. At what point do we stop caring about the law at all? Maybe we should advocate openly, as some of these Democrats are, lawlessness, and have this be our new platform.
HOMAN: If they don’t do operations like this, if they don’t carry out the judge’s order, there would be no integrity in the entire system. It means nothing. There are no consequences, no deterrence. They can just keep coming from across the border if you bring a kid. You won’t be detained if you bring a kid. You won’t be arrested if a judge tells you to remove yourself. These mayors aren’t the only ones resisting ICE. You’ve got acting Secretary of Homeland Security [Kevin McAleenan] resisting what ICE is trying to do. In the Washington Post story, and numerous media outlets, he does not support this operation. And I tell you what, if that’s his position then he’s on the wrong side of this issue. You don’t tell the men and women of ICE a day before they go out there to do this operation.

When this story was leaked, they gave the location of the cities, the day this was supposed to start, how many targets. This leak, which I know where the leak came from, I think we all know where the leak came from. That story only benefits one person. Put these officers at greater risk of harm. I know the president said we’re going to do an operation, one million people in a week. He didn’t give the location. He didn’t give the number of targets.

Share This Post
Like it? Vote it up!
00
Previous ArticleWhy Trump, U.S. Must Watch Central Park Trial SeriesNext ArticleThe More You Know | The cost To Build The HealthCare.gov WEBSITE ALONE Reached Over $2.1 billion
You May Also Like
Donald Trump Assaulted Me in a Dressing Room
June 22, 2019
A Dem Sweep Is the Best Chance to Reduce Gun Violence
August 6, 2019
Department of Homeland Security Secretary Kirstjen Nielsen Out
April 8, 2019
‘Trump Rapes Us All with Impunity’
July 25, 2019

The More You Know | The cost To Build The HealthCare.gov WEBSITE ALONE Reached Over $2.1 billion

The More You Know | The cost To Build The HealthCare.gov WEBSITE ALONE Reached Over $2.1 billion View Reddit by M_i_c_K - View Source

The criminal justice system failed Korey, Raymond, Antron, Kevin and Yusef. We owe it to all of our children to not repeat the injustices of our past. Source link Veterans In Defense Of Liberty - Vidol