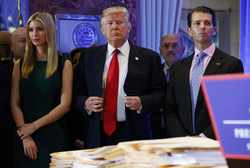 WASHINGTON — I’ve got the perfect slogan for President Trump’s re-election campaign: “Promises Made, Promises Not Kept, But I’m Betting My Voters Are Too Stupid to Notice.”

Trump promised to build a wall along the 2,000-mile southern border, with the cost of the “big, beautiful” barrier to be borne by Mexico. Trump made this pledge not once but dozens of times, in a call-and-response ritual at his campaign rallies. “Who’s going to pay for the wall?” he would demand, and the cheering crowds would yell the answer: “Mexico!”

Result: Not a single mile of Trump’s wall has been built. When Mexican officials made clear they would never pay a cent toward construction, Trump asked Congress for the money. Even with Republicans in control of both the House and the Senate for two full years, Congress declined to waste taxpayer dollars on the project. When Democrats took the House, Trump declared a “national emergency” in an attempt to steal funds from other projects. Still, despite what he claims, Trump has built no new wall.

Trump promised to reverse trade policies that he said were allowing the rest of the world to play Americans for suckers. He pointed to the U.S. balance-of-trade deficit as a yardstick measuring the “stupidity” of prior administrations that allowed trading partners like China, Mexico, Germany and even Canada to walk all over them. Tariffs were the solution, Trump said, as he launched a series of trade wars. “I love tariffs,” he crowed.

Result: The Commerce Department announced Wednesday that the overall U.S. trade deficit in goods last year soared to an all-time high of $891 billion. The deficit with China, Trump’s principal target — the amount by which the value of imported goods exceeded the value of exported goods — reached a record $419 billion. Many economists believe this is actually a sign of the U.S. economy’s relative good health. But according to Trump’s understanding, or misunderstanding, it is an abject failure.

Trump promised on Twitter that “there is no longer a Nuclear Threat from North Korea.” He made that boast last year following his summit in Singapore with Kim Jong Un, with whom Trump said he had fallen “in love.” Most experts on North Korea warned that Kim’s vague promises to work toward “denuclearization” were worthless, but Trump insisted he had made a breakthrough and mused about possibly winning the Nobel Peace Prize.

Result: Following months of little or no progress, Director of National Intelligence Dan Coats told Congress in January that North Korea is “unlikely to completely give up its nuclear weapons.” A second Trump-Kim summit, held last month in Hanoi, ended abruptly without an agreement. Around the same time, according to news reports, the North Koreans restarted work on a ballistic missile site. While Pyongyang has refrained from further tests of its nukes and missiles, Kim’s stockpile likely continues to grow. The threat remains.

Trump promised to repeal and replace the Affordable Care Act, claiming he would put in place a new health insurance system that would deliver better results and lower costs. He made the assault on Obamacare the main thrust of his first year in office.

Result: Obamacare remains the law of the land. Trump and the Republican-controlled Congress failed in an attempt to repeal the ACA and did not even make a serious attempt to design a potential replacement. Republicans have managed to chip away at the health care law — the individual mandate is gone, for example — and Trump often claims the ACA is “imploding.” But still it stands.

Trump promised to spend up to $1.5 trillion on refurbishing the nation’s infrastructure, building new airports, bridges, tunnels, roads and other gleaming monuments to American greatness. He said he was uniquely able to oversee such a program because of his successful career as a real estate magnate.

Result: “Infrastructure Week” has become a running joke. Every once in a while, the administration announces it is launching the infrastructure campaign — then does nothing meaningful to follow through.

Trump promised to “drain the swamp” of corruption in Washington.

Result: Perhaps the most corrupt administration in U.S. history, riddled with nepotism and teeming with swamp creatures.

I could go on. Trump did fulfill some promises he made to far-right ideologues (appointing archconservative judges) and the ultra-rich friends he sups with at Mar-a-Lago (cutting taxes for the wealthy). Overall, though, his administration has been a great big failure.

He apparently believes his loyal supporters are the dumbest, most gullible people on earth. We shall see if he’s right.

Share This Post
Like it? Vote it up!
00
Previous ArticleThunderbirds Commander Fired for ‘Loss of Confidence’Next ArticleOver 100 Congressional Democrats Vote To Lower Voting Age to 16
You May Also Like
U.S. Steel Tariffs Helping to Clean Up the Environment in Pennsylvania
May 3, 2019
A (Non-Brexit) Look at European Politics
March 6, 2019

Over 100 Congressional Democrats Vote To Lower Voting Age to 16

The amendment failed. This time. The left has an historical ability to appeal to the young. Given that polls and studies show that the majority of people outgrow their wide-eyed, ill-conceived leftist idealism, the left is ramping up its attempts to sell its shiny, empty promises to our nation’s

The commander of the Air Force Thunderbirds has been relieved of command due to loss of confidence in his leadership, the service announced. With the season complete, Brig. Gen. Jeannie Leavitt, 57th Wing commander, relieved