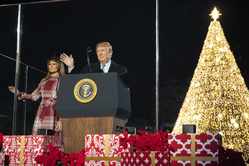 On a blustery, snowy Sunday afternoon in early February 2016, Republican presidential candidate Donald Trump was holding forth before a cheering crowd in the jam-packed SNHU ice hockey arena in Manchester, New Hampshire.

It was two days before the state’s first-in-the-nation Republican primary. Trump, who finished a close second to Texas Sen. Ted Cruz in the Iowa caucuses one week earlier, was looking for his first win on the long road to the Republican nomination.

As the snowstorm swirled outside, Trump was onstage doing what was to become a familiar routine: triggering wild roars of approval by declaring his support for military veterans and police officers . Then, he stopped, and as if the thought just popped into his head, pointed his finger at the audience and shouted, “And you are going to be able to say, ‘Merry Christmas’ again!”

The explosion of approval shook the arena. A reporter from China seated in front of me turned around and asked, “What does that mean?”

For a minute or two I was as puzzled as he was. Then it dawned on me: This wasn’t really about Christmas. Millions of Americans simply don’t like to be told they can’t say something they do not find offensive. Worse, they don’t take well to being ridiculed as insensitive for saying it.

In other words, those cheers were saying to the pushy politically correct crowd: “Leave me alone! I will say what I want.”

Perhaps the unofficial ban on “Merry Christmas” was always overblown. It seemed to me, however, that it was becoming more difficult to find cards with “Merry Christmas” printed on them. Cards expressing “Season’s Greetings,” “Happy Holidays,” “Warm Winter Wishes” and “Love and Peace” were more common.  Growing numbers of people, for fear of violating some unwritten code, began to wish their friends “Happy Holidays.”

It may have been a throwaway line at first, but Trump heard the response that night and he went on during the campaign to use the “Merry Christmas” line at most of his rallies. It drew huge cheers whenever he said it. He was touching a chord. While it’s not listed among his accomplishments as president, it seems anecdotally that more people across the country do feel emboldened to say “Merry Christmas.”

A triumphant Trump has taken to asking his recent rally crowds, “Do you like being able to say, ‘Merry Christmas’ again?” The cheers of affirmation are deafening.

I realize there are many out there who still find “Merry Christmas” needlessly sectarian and who scoff at its political potency. But in the real world — and by that I mean outside of Washington, D.C., and away from big cities and college campuses on the East and West Coasts — it’s a metaphor for many of the other things Trump supporters are demeaned for:

Such rigid dictums have been presented as inviolate by the Democrats on the 2020 presidential debating stages, and by the friendly journalists questioning them. It’s as though they learned nothing from 2016, when Democratic presidential nominee Hillary Clinton said half of Trump’s supporters belong in a “basket of deplorables.” Like the Japanese who attacked Pearl Harbor in 1941, she found out the hard way that she awakened a sleeping giant.

When Americans say, “Merry Christmas,” many are not making a religious statement.  They might merely feel they are following tradition and wishing the person they are greeting the joys of the season. It’s the way they have always done it and the way they prefer – nothing more.

But the politically correct police are still out there patrolling the highways and byways.  If they again start busting people for religious beliefs and traditions they hold dear, the familiar term “Merry Christmas” could be an issue in the 2020 election — with surprising results.

Richard Benedetto is a retired USA Today White House correspondent and columnist. He now teaches media and politics at American University and in The Fund for American Studies program at George Mason University. Follow him on Twitter @benedettopress.

Share This Post
Like it? Vote it up!
00
Previous ArticleThree Theories for Why You Have No TimeNext Article3 Dead, 4 Children Rescued After Double Murder in Florida
You May Also Like
Woman Fired After Confronting Customer Wearing MAGA Hat
April 4, 2019

GM Workers Strike to Get Back What the Recession Stole
September 19, 2019
Louisiana Poised to Enact Sweeping Obamacare Alternative
June 11, 2019

Mueller Deserves a Medal of Honor
July 29, 2019
Why Dems Are Right to Boycott Republican Businesses
August 9, 2019

Three adults are dead and four children have been rescued from a home following an apparent murder-suicide in Lakeland, Florida, on Christmas Eve, reports WFLA. The Lakeland Police Department said it received a call at 5:30 p.m., prompting officers to respond to the house in under five minutes, said the local

Three Theories for Why You Have No Time

One of the truisms of modern life is that nobody has any time. Everybody is busy, burned out, swamped, overwhelmed. So let’s try a simple thought experiment. Imagine that you came into possession of a magical new set of technologies that could automate or expedite every single part of your job. Read