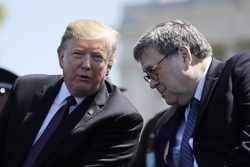 Democrats leading the impeachment charge against President Trump have repeatedly called on him to justify his assertion that Obama administration officials tried to undermine his 2016 presidential campaign and election. On Thursday night, he took the first step in trying to do just that when he ordered the declassification of intelligence documents that he has said show the pathway Obama officials navigated to spy on the campaign.

In a directive to the CIA, the director of National Intelligence, the Pentagon and several other national security agencies, Trump handed Attorney General Bill Barr the authority to declassify or downgrade “information or intelligence that relates to the attorney general’s review.”  The president ordered the agencies to “promptly provide such assistance and information as the attorney general may request in connection with that review.”

Barr has begun looking into the origins and timing of the FBI’s 2016 counter-intelligence investigation, code-named “Crossfire Hurricane,” aimed at uncovering evidence that Trump campaign officials were conspiring with Russians to interfere in the election. The FBI’s probe included wiretaps on a Trump adviser Carter Page.

Trump’s move came earlier than many of his allies and associates had expected. Most had expected him to wait until Justice Department Inspector General Michael Horowitz released the results of his year-long investigation into the sources and methods the FBI used to begin surveillance on the Trump campaign based at least in part on discredited information gathered by former British spy Christopher Steele.

Barr has said the inspector general is wrapping up his probe and could release a final report as early as next month.

But after a series of fiery clashes between Trump and Speaker Nancy Pelosi over the last two days, Trump moved to begin the declassification process.

White House press secretary Sarah Huckabee Sanders in a statement said the order “will help Americans learn the truth about the events that occurred, and the actions that were taken during the last presidential election and will restore confidence in our public institutions.”

Sanders also underscored the “the full and complete” authority Barr now has “to declassify information pertaining to this investigation, in accordance with the long-established standards for handling classified information.”

The move also could help detail the role former CIA Director John Brennan played in pushing the narrative regarding Russian efforts to penetrate the Trump campaign. The first evidence of those efforts, according to media reports, came from foreign intelligence sources’ tipoffs, based on voice intercepts, computer traffic or human sources based outside the United States, dating back to 2015.

Former National Intelligence Director James Clapper has argued that the unproven “Russian dossier” that Steele composed — and which was bankrolled by the Democratic National Committee and the Clinton campaign — was not the primary source for the FISA warrants. If not, then the declassified FISA-related documents will undoubtedly show what other information officials used to secure the surveillance warrants.

Nearly two years ago, when Trump accused Susan Rice, Obama’s national security adviser, of engaging in the “unmasking” of U.S. persons as part of the counter-intelligence probe, a potentially criminal act, Democratic Rep. Adam Schiff said he should show proof that it occurred.

“If he’s going to make accusations of criminality against anyone, he needs to show evidence to support that kind of charge,” the then-ranking member of the House Intelligence Committee said at the time.

Rep. Eric Swalwell, now a candidate for the Democratic presidential nomination, went further, arguing that “if the president wants to say that Susan Rice committed a crime, he has the power to declassify. No one else does.”

Trump tried to declassify materials related to the FBI’s Russian investigation back in September, but Democrats objected that doing so would compromise FBI “sources and methods.” The president abandoned the plan after key allies called on him not to release the material over concerns that doing so could have a negative impact on the then-ongoing Russia probe led by Special Counsel Robert Mueller.

Trump and his allies have said that scrutinizing the FBI’s “sources and methods” is the only way to determine whether the U.S. government’s spying laws, which were greatly expanded after the 9/11 attacks, were abused to undermine Trump’s presidential campaign or to try to derail his presidency once elected.

A Disturbing Development in Washington
March 9, 2019

Does Trump Have an Off-Ramp on Iran?

Trump's provocative rhetoric has led many Americans to believe that the U.S. will go to war with Iran within the next few years. Source link Veterans In Defense Of Liberty - Vidol