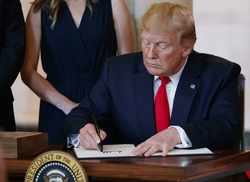 Presumption of innocence. Adjudication by a neutral arbiter. Fair proceedings. Every American knows that these rights, guaranteed by the U.S. Constitution, protect us against unjust or arbitrary exercises of government power.

But as an increasingly ravenous government has swelled in size and scope, it has come to act more and more through administrative proceedings that dispense with these constitutional safeguards. Thanks to President Trump, that is changing in a big way. The president recently signed a pair of executive orders designed to reinforce time-honored bulwarks of the rule of law and rein in a bureaucracy run amok.

Consider this example from previous administrations that current Agriculture Secretary Sonny Perdue has worked hard to rectify. In the late-1990s, a farmer in Indiana cut down nine trees on his property. The U.S. Department of Agriculture in 2002 conducted a site visit and evaluated this action, and in February 2003 claimed he had improperly converted wetlands to cropland. The farmer appealed and made his case that same year.

As part of his appeal the farmer was assigned another site visit, but nearly a decade passed without a word from USDA. In the intervening years, the farmer passed away. In November 2012, the Obama-era USDA realized it had not completed the required site visit, visited the farm, and reached the same decision from nine years earlier. The farmer’s widow finally took the case to federal court and in August 2019, the Seventh Circuit provided relief and took the Obama USDA to task for failing to examine relevant facts and relevant data, as well as failing to articulate a satisfactory explanation for its actions. Fortunately, Secretary Perdue was at the helm of the Trump USDA and took action, initiating a review of pending litigation to ensure this USDA would never repeat the mistakes of its predecessors. Until this administration’s reforms, Americans could only look to the courts to fight back against the administrative state’s overreach.

President Trump is committed to ending such bureaucratic bullying. Last October the president signed two executive orders that ensure transparency in administrative action and root out dubious practices across the federal government. One targets the problem of agency guidance documents. Agencies have increasingly issued “guidance” instead of using statutory rulemaking procedures to sidestep procedural safeguards and to quietly make policy without public input.

This executive order requires agencies to make such guidance accessible online and stamps out attempts to bind the public by way of guidance that may not be readily available or understood. While some guidance can be helpful — by translating complicated legalese into layman’s terms — guidance documents can be costly, sow confusion, and create legal liability for American families, consumers, and small businesses that don’t have a team of well-heeled attorneys on retainer. You should not be punished for failure to know rules that a Washington bureaucrat has intentionally made obscure.

The president’s other order requires agencies to act fairly in administrative enforcement actions or adjudications. Americans must know the rules in advance; government enforcement should not be an unfair surprise. Together, these two executive orders mark a decisive step in the right direction. Even better, the Trump Administration aims to do more to establish a truly fair administrative enforcement process, affirming the rule of law and our constitutional values.

On January 30, 2020, I published a request for information that will form the basis of the next steps in reforming regulatory enforcement and adjudication. The request for information asks about the kinds of procedural protections that will ensure adequate due process for every American who interacts with a federal agency. For instance, what reforms would avoid a prolonged investigation? Should investigated parties have an opportunity to require an agency to “show cause” to continue an investigation? Do agencies provide enough transparency regarding penalties and fines? Average Americans shouldn’t need a team of expensive lawyers to defend their rights.

I invite all Americans who deal with regulatory enforcement and adjudication in the federal government to respond and participate in this process. Constructive feedback means an informed policy process. The administration recognizes that procedural protections vary considerably by department, agency, and sub-agency, but we are committed to comprehensive procedural reform that promotes fairness and upholds our constitutional values.

These reforms fit squarely in the president’s broader deregulatory agenda, too. This president pledged to slash burdensome regulations and revive the rule of law, and he has achieved more deregulation than any prior administration. President Trump’s historic efforts have already reduced regulatory costs by $50 billion, and costs are on track to fall by at least as much in Fiscal Year 2020.

For each significant regulatory action since President Trump took office, federal agencies have stripped away more than seven regulations. The administration’s commitment to deregulation means consumers and small businesses no longer face the buildup of costly new federal regulations, contributing to our booming economy. Since November 2016, the economy has added more than 7 million jobs. The unemployment rate remains at a 50-year low. Americans are confident again in future prosperity.

Importantly, the president’s emphasis on deregulation has signaled a renewed commitment to the rule of law, which will affect generations into the future. President Trump’s actions will ensure government respects the rights of Americans for years to come.

Russ Vought is the acting director of the White House’s Office of Management and Budget.

How Trump Complicates the Lives of His Democratic Rivals
April 27, 2019

If They Want Paid Leave, Dems Should Compromise

For the fourth year in a row, President Trump called for paid family leave in his State of the Union address, a remarkable trend given past GOP silence on the issue. For years, Republican lawmakers tabled the idea of a modernized, federal paid leave plan. But under Trump, the party has