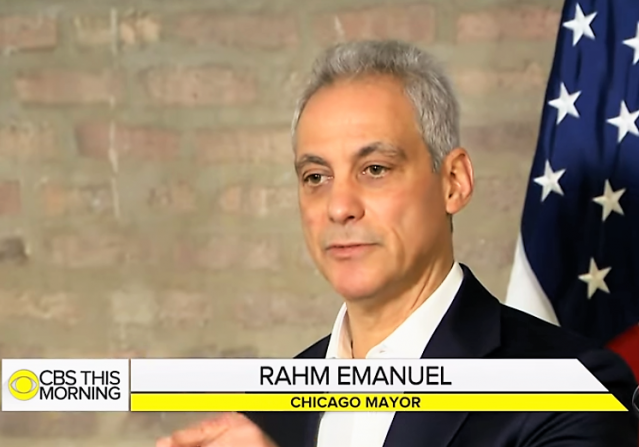 “The only reason Jussie Smollett thought he could take advantage of a hoax about a hate crime is for the environment, the toxic environment that Donald Trump created.”

When the charges were dropped against Jussie Smollet for one the infamous hate crime hoaxes, Chicago Mayor Rahm Emanuel was indignant:

Emanuel called the prosecution’s decision to drop all charges against Smollett “a whitewash of justice.

“This is a whitewash of justice. A grand jury could not have been clearer,” Emanuel said. He said the $10,000 bond that Smollett forfeited doesn’t cover the cost of the investigation.

Emanuel complained of “the ethical cost” to Smollett allegedly faking a hate crime.

Emanuel plans to go after Smollett for the cost of the investigation:

The City of Chicago’s Law Department has billed “Empire” actor Jussie Smollett for the costs of the Chicago Police Department investigation that determined he was lying about being the victim of a hate crime in January.

In a letter sent to Smollett titled “Re: Repayment of Investigation Costs for False Police Report,” the city’s Corporation Counsel writes that it requires “immediate payment of the $130,106.15 expended on overtime hours in the investigation of this matter.”

The letter goes on to say if the amount is not paid in a timely manner the Department of Law may prosecute Smollett for making a false statement.

“A violation of the false statement ordinance imposes a fine of not less than $500.00 and a maximum of $1,000.00, plus up to three times the amount of damages the City sustains as a result of the violation,” the letter states.

“Given that he doesn’t feel any sense of contrition and remorse, my recommendation is when he writes the check, in the memo section, he can put the word ‘I’m accountable for the hoax,’” Emanuel said at an unrelated event on Thursday.

Emanuel remains indignant, but not just at Smollett. Emanuel is claiming Trump created a climate of hate that enabled people like Jussie to pull hate crime hoaxes:

Chicago mayor Rahm Emanuel took aim at President Trump over what he said was the “toxic environment” the billionaire has created, adding that it played a role in the Jussie Smollett hate crime “hoax.”

“Look, I’ve always said from day one, this is a Trump-free zone, the city of Chicago, and I mean it,” Emanuel said during a press conference on Thursday. “Let me be really clear about something: The only reason Jussie Smollett thought he could take advantage of a hoax about a hate crime is for the environment, the toxic environment that Donald Trump created.”

Emanuel said the the “moral equivalency” Trump drew between promoters and opponents of “bigotry” was unacceptable, calling out Trump’s declaration last April that there were good people “on both sides” of the violence in Charlottesville, Virginia, which left one person dead.

This is completely insane.

Trump has not created a climate of hate, but if he had, wouldn’t that lead people to commit actual hate crimes, not hoaxes?

You know what creates dozens and dozens of hate crime hoaxes? The Democrat culture of identity-obsessed victim politics.

Share This Post
Like it? Vote it up!
00
Previous ArticleIn search of the “Anonymous Source” for CNNNext ArticlePurely Sickical By Nature
You May Also Like
Nolte: Total of 9 KKK Members Hold Rally in Ohio
May 27, 2019
Coulter: Mueller Has a Reputation …
July 24, 2019
Important win for Jewish students against anti-Zionist discrimination at California State and San Francisco State
March 31, 2019
New York Times Declares 'Setback' for Netanyahu as He Wins Israeli Election
April 10, 2019
Bill Weld: Trump Is Like Nero and Caligula
March 13, 2019

In search of the "Anonymous Source" for CNN