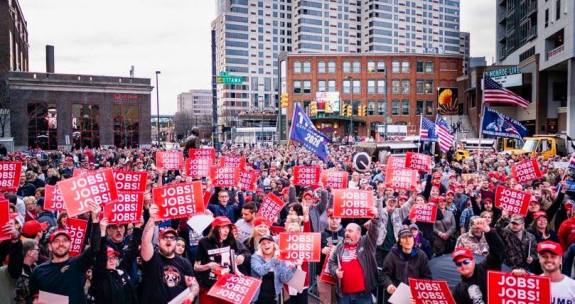 During his awesome speech to CPAC President Trump made it clear that a central theme of the next two years of his presidency will be battling the Socialist Democrats and that his reelection will be the ultimate test of whether conservatives can turn back the rising tide of Democrat statism.

In conversation with White House staff it has been made clear that the President’s remarks at CPAC were not just an example of preaching to the choir and that the administration considers the Democrats’ move to the Far Left to be a serious challenge that was observed coming a long way off and would be confronted at every opportunity.

And it appears Democrats are all-in to defend their long-hidden commitment to a Socialist America.

Joel Bleifuss, editor & publisher of the Far-Left publication In These Times, framed the battle this way in a March 25, 2019 op-ed:

We believe we have the power, as Paine put it, “to begin the world over again.” This confidence in our ability to build a just society animates the Movement for Black Lives, the Sunrise Movement, and an uncompromising generation of young congressional leaders and millennials who won’t take “slow” for an answer when it comes to transitioning to a green economy.

The GOP is wagering that the Green New Deal and the rebirth of democratic socialism can be crafted into a campaign message that will mitigate the electorate’s growing revulsion toward the GOP brand. We bet that a bold program that empowers working people, repudiates racism and protects what’s left of our fragile planet will win at the polls in 2020.

We find it interesting that Bleifuss detects a “growing revulsion toward the GOP brand” on the Left, because we find a similar revulsion on the Right, but it is not associated with President Trump and his policies. Rather, it is associated with those Republican congressional leaders who have failed to keep their promises to support President Trump and enact his agenda.

Moreover, the Democrats, particularly their Far-Left wing, are demonstrably not the workingman’s friend.

The Democratic Party has long portrayed itself as taking the same place in the American political marketplace as do the Labor parties of Europe – but the policies that today’s Democratic Party advocates, especially its embrace of amnesty and benefits for illegal aliens, bear little relationship to the day-to-day concerns of working Americans.

Back in 2014 The Polling Company, conducted a poll that found likely voters were unequivocal in their support of immigration policies that protect the American worker. Their sentiment is the inverse of the oft-repeated phrase, “illegal immigrants do the jobs that Americans don’t want to do,” saying instead that these workers should have a fair opportunity to do the jobs that illegal immigrants currently do.

And these voters get the economics of illegal immigration and understand that depressed wages are one of the results of allowing a flood of illegal aliens to enter the American workforce.

“Raise the pay” was the rallying call for these voters, who believed there are plenty of Americans to do the work and that better pay, and more training is an elixir for labor shortages. Working class voters, married women, and political Independents agreed with this in dramatic numbers.

These results turn the often-heard statement that illegal immigrants do the jobs that Americans won’t do on its head. Over 8-in-10 respondents believed that American workers and legal immigrants already in the U.S. should get first pick at these jobs before illegals. The poll showed that blue collar workers support having the opportunity to take those positions more than the any other demographic group studied.

Donald Trump recognized the untapped political power of blue collar workers who had been abandoned by Democrats and Republicans and he forged them into a central part of his conservative populist coalition.

And he has produced for them.

President Donald Trump’s first full year in office saw gains that easily outdistanced any year for his predecessor, Barack Obama, whose best showing was the 2.2 percent increases in 2016 and 2014. Six of Obama’s eight years in office saw gains of 2 percent or less. Wages registered a 2.6 percent gain for 2017, tied for the best since 2007, the Bureau of Labor Statistics reported.

According to the February 2019 Employment Situation Report from the Bureau of Labor Statistics, nominal average hourly earnings rose by 3.4 percent over the past 12 months—the fastest nominal hourly wage growth since 2009, and the 7th straight month that year-over-year wage gains were at or above 3 percent.

Contrast those results with the job killing regulations, crony capitalism and corporate welfare of the Obama era and the decision of American workers to vote for Donald Trump was easy.

In the Roosevelt-Truman era improving wages and the quality of life for American workers is what the major labor unions, and the Democratic Party, claimed to stand for, but no more. Today, the Democratic Party represents the narrow interests of race-based pressure groups, like La Raza, and the liberal urban elite, like Facebook founder Mark Zuckerberg, who are far removed from the day-to-day cares of working American families.

If the Green New Deal, corporate welfare, free stuff for everyone and open borders are going to be the central tenets of the Democrats’ 2020 campaign we say bring it on.

Share This Post
Like it? Vote it up!
00
Previous ArticleAssault on America, Day 90: Trump campaign preview reveals no let-up to Make America GreatNext ArticleWill Rep. Ilhan Omar Get The Rep. Steve Stockman Treatment?
You May Also Like
African Rhino Poacher Trampled by Elephant, Then Eaten by Lion
April 7, 2019
Mueller Cleared Trump – Now Get Over It
May 8, 2019
‘No Press Conference,’ ‘Footage,’ or ‘Explanation’
August 13, 2019
Report: Democrats to Condemn 'All Hate,' Not Anti-Semitism Specifically, in Resolution
March 7, 2019

Will Rep. Ilhan Omar Get The Rep. Steve Stockman Treatment?