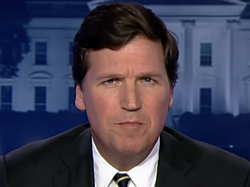 TUCKER CARLSON, FOX NEWS: So after two years, here we are. It’s hard to believe any of it actually happened. Two years of unremitting, never-diminishing hysteria about Russia. A continuous wave of panic and superstition over unseen Slavic interference, all stoked by the very people we’re told are the most rational in our society. For two years, our capital city became a kind of massive CNN panel — a living monument to ignorance and dishonesty, where the loudest and dumbest invariably got the most attention. We just lived through two full years of that: screaming, threatening, surveillance, character assassination, loyalty tests, wild allegations of treason and spying and betrayal. Innocent people found themselves afraid to go to dinner, hesitant to send text messages or talk on the phone. For two years we lived in an all-pervasive cult of personality. Our leaders worshipped a 74-year-old federal prosecutor who never spoke in public. He alone was good, they told us. Only they could interpret his will. It was all thoroughly bizarre. Demented really, though nobody said so at the time. They were too afraid. It seems like a dream now. Which of course it was. None of it was real. Nobody colluded with Vladimir Putin. Nobody changed vote totals. Or met secretly in Prague. Or had a pee tape. There never was a Russia conspiracy. Hillary Clinton wasn’t robbed by Julian Assange, or anyone else. She lost the election because she was an entitled boor who didn’t run on anything. In the end, that’s what Robert Mueller proved.

The news anchors couldn’t handle that conclusion. It was too far from what they’d promised their audiences for so long. They were too invested in the lies. When the report arrived in congress this morning, they found themselves reduced to huffing and sputtering. They couldn’t admit what was in it. Well, they told us, Robert Mueller “didn’t exonerate President Trump.” That may be true, but only theologically. Mueller doesn’t have the power to absolve sin. Only God can do that. But in every other sense, Mueller’s report was exculpatory. If dozens of federal prosecutors spent two years trying to charge you with a crime, and then decided they couldn’t, it would mean there wasn’t any real evidence you did it. That’s what happened here. You may not like Donald Trump, but that’s what we learned from the Mueller Report. You’d have to be a mindless partisan to deny it. A lot of news anchors turn out to be mindless partisans. When the facts contravene the interests of their party, they deny the facts, and then attack anyone who persists in stating the obvious. Suddenly the very same people who lied to you for two years about Russia are demanding that, under no circumstances, are you allowed to believe anything that Attorney General Bill Barr might say. Sure, Barr looks like a conventional Republican, being a Jeb Bush donor and everything. Yes, he would appear to be a close personal friend of Robert Mueller’s. But it’s all a ruse. Barr is in fact a Putin stooge like all the rest:

JEFFREY TOOBIN: If you just look at his behavior, it is not that of a geriatric, it is that of a partisan

MSNBC guest Elie Mystal: We should not take anything that Barr says tomorrow as anything other than performative.

CHRIS CUOMO: Is Barr the President’s new fixer? The answer to that seems to be yes.

NICOLLE WALLACE: He becomes to first cabinet secretary to plunge into the deep end of Trump’s conspiracy pool.

It’s an inside job. That’s the reigning assumption. Somehow Bill Barr is preventing Robert Mueller from concluding that Donald Trump colluding with Vladimir Putin. How is Barr doing that? It’s not clear, but they’re no less certain that he is. Michelle Goldberg of The New York Times announced that Barr’s press conference this morning marked America’s transformation into a, quote, “authoritarian junta.” Her colleague, Maggie Haberman, suggested Trump might be a Nazi, because the White House played a song from The Sound of Music — which by the way, is an anti-Nazi musical. But still Germanic-sounding, and therefore suspicious. These are hysterical children. They shouldn’t be in journalism. But they are. They run journalism. They have no plans on giving up their power.

The Mueller Report may be the single most humiliating thing that’s ever happened to the White House press corps in the history of this country. How did reporters in Washington respond? They celebrated themselves. Over on CNN, former Obama official Jim Sciutto bragged that Mueller had quote “debunked” all of Trump’s unfair attacks on the media. At the Washington Post, Philip Bump was telling us that quote, “the vast amount of reporting” on Russia was accurate.

Even they don’t really believe this. They know they lied. Buzzfeed claimed its reporters has personally seen evidence that Michael Cohen had been instructed but Donald Trump to perjure himself. The editor of Buzzfeed defended that story extensively, including on this show. Now we know it was a lie. That and so much more. So what happens now? What do we do with John Brennan and Jim Clapper? They used to run powerful intelligence agencies. For the past two years, they’ve gotten rich from talking about Russia on television. The only problem is, they were lying:

O’DONNELL: What makes you believe that he has more indictments?

BRENNAN: Because he hasn’t addressed the issues related to criminal conspiracy as well as individuals —

CLAPPER: Is there influence whether witting on unwitting by the Russians over President Trump. And in the intervening year and a half or so, you know, his behavior hasn’t done much at least in my mind to allay that concern.

So do Clapper and Brendan get to keep their cable TV contracts? Probably. In decadent societies, the guilty aren’t punished. Only the unpopular are. Over on the other channels, they’re talking about Trump tonight, not themselves. The line they’re quoting most is from today’s report. It’s Trump’s response when he first learned there was going to be a special counsel investigation. “Oh my God,” he said. “This is terrible. This is the end of my Presidency. I’m effed.”

As it turns out, Trump was wrong on the specifics. He never got indicted. Mueller didn’t drive him from office. But, as usual, Trump’s instincts were clearer. In fact, dead on: In the ways that matter most, the Russia hoax did sabotage his presidency. Mueller’s investigation ended critical momentum from the 2016 election almost immediately. Lawmakers, including a shamefully large number of Republicans, were much happier to talk about Russia than about changing the status quo in Washington, which is what Trump ran on. So they talked about Russia. The result: an election that should have realigned the country, had almost no effect. Two years later, virtually nothing has changed. Millions are still flood over our border from the third world, encouraged by an army of non-profits that instruct them to subvert our laws. The opioid epidemic rages on, as horrible as ever. Suicides are up. Troops are still bogged down in Afghanistan and Syria. Goldman Sachs still controls our economy. Tech companies are still spying on you and crushing your freedom of speech. You can still have your life ruined for supporting the wrong candidate, or believing there are two genders. Most ominous of all, Americans are still dying younger and having fewer children. None of this was resolved. It was never even talked about. The Russia investigation didn’t destroy Trump. But it did a lot to destroy America.

Mueller Made One Mistake: He Trusted Bill Barr

The report that the attorney general says clears Trump actually says that Trump lied, lied, and lied again-and pressured his subordinates to do the same. Source link Veterans In Defense Of Liberty - Vidol