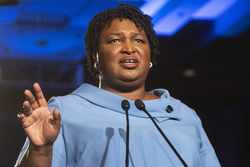 The Big Lie is back in style. Wikipedia tells us that the term was invented by Adolf Hitler to describe what others did — though he was the biggest liar of all. “The broad masses of a nation,” he wrote in “Mein Kampf,” “more readily fall victims to the big lie than the small lie.”

No one on the political scene in this country or any democratic nation is a monster comparable to Hitler. But some have resorted to the Big Lie in their attempts to override clear decisions of the people, at the risk of delegitimizing the nation’s democracy.

Exhibit A: the claims that Democrats Stacey Abrams and Andrew Gillum “won” last fall’s elections for governor in Georgia and Florida. Actually, both of them lost by a 50-49 percent margin.

Abrams admits this but insists, “so many people were disenfranchised and disengaged … that I feel comfortable now saying, ‘I won.'” Presidential candidate Kamala Harris told the Detroit NAACP, “without voter suppression, Stacey Abrams would be the governor of Georgia. Andrew Gillum is the governor of Florida.”

This is nonsense. Voter turnout was up 54 percent in Georgia and 38 percent in Florida from 2014 levels, and the “voter suppression” people complained about was standard procedures, required by a 1994 federal law.

The suggestion that this amounts to the kind of voter suppression blacks experienced before the 1965 Voting Rights Act — suppression by unfair laws, threats of violence and murder — is preposterous. Perhaps Abrams hopes to convince the many blacks moving to Georgia that it’s run by white segregationists. But she and those who echo her charges are saying that America is moving backward on basic civil rights. That’s a Big Lie, one that stokes racial mistrust and hatred.

Exhibit B: the claims that Donald Trump and his 2016 campaign colluded with the Russians. Perhaps there was reason to believe this two or three years ago, from candidate Trump’s refusals to condemn Russian President Vladimir Putin, from his proposed Moscow hotel. Weird!

But the absurdity of much in the Steele dossier, and the fact that it was paid for by the Clinton campaign, should have sent up warning flags. The argument that a few Russian bot Facebook ads could have swung the election was obviously flimsy.

Even so, it was a rude shock to MSNBC and CNN viewers when Attorney General William Barr accurately reported that special counsel Robert Mueller found no evidence of Trump collusion with Russia and reached no conclusion that he had obstructed justice.

Two months later, Democrats are still itching to impeach Trump on some pretext, and many want to rake over the cold coals once more to somehow get a flame going. But it’s apparent now that the collusion charges were a Big Lie, promoted by top Obama administration officials, who either deliberately or recklessly broke the rule that intelligence and law enforcement agencies ordinarily shouldn’t interfere in elections.

The Big Lie here is that modest-income voters — “trade workers, barmaids, cleaners and labourers,” in Australian Quillette editor Claire Lehmann’s description — are voting irrationally, against their own short-term economic interest. Wasn’t Labor promising to funnel rich people’s money to them?

We hear the same condescending analyses from coastal critics of Rust Belt Trump voters and metropolitan London critics of British Brexit voters. How dare they not follow the guidance of their sophisticated superiors? They must be stupid or vicious, idiots or bigots.

The obvious reply is that these voters, like their critics who vote for politicians who promise to raise their taxes, value some things more than marginal short-term economic gain. They will cheerfully forgo short-term gains and prefer policies they believe are better in the long term for them and their country.

And they have some reason to discount the sophisticates’ expertise and suspect their motives. The Bank of England predicted Brexit would wreck the economy. Instead, Britain’s growing faster than continental Europe. The New York Times’ Paul Krugman predicted the stock market would fall “forever” after Donald Trump won. Has he checked his 401(K) lately?

From Atlanta to Adelaide, from the Steele dossier to the Brexit opponents, the Big Lie is being deployed in the service of people seeking to delegitimize the results of elections. But as one observer said, refusing to “respect the results” of an election is “threatening our democracy.” That was Hillary Clinton, tweeting on Oct. 21, 2016.

Michael Barone is senior political analyst for  the Washington Examiner, resident fellow at American Enterprise Institute and longtime co-author of The Almanac of American Politics.

Have Democrats Given Up on Beating Trump in an Election?

Nancy Pelosi has the hardest job in town, perhaps except for the president's. She knows removing Donald Trump from office is probably impossible, but a growing number of Democrats in the House are itching to try. How can the speaker please both the grown-ups and the fantasists in her caucus,

Special Counsel Robert Mueller has officially closed up shop, and the results of his investigation are clear: no collusion, no obstruction. I’m glad the sideshow is over, but some serious questions still need to be answered. Source link Veterans In Defense Of Liberty - Vidol