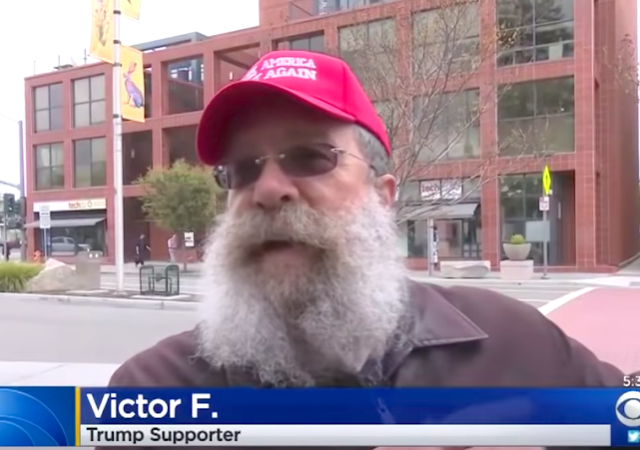 The man is Jewish so “being called a Nazi is hurtful.”

On Tuesday, 74-year-old Victor (no last name given) in Palo Alto, CA, went into a Starbucks for coffee when Rebecca Mankey confronted him over his MAGA hat. She even boasted about the confrontation on social media.

“This woman came over and not only started screaming at me, she turned to the Starbucks audience and said, ‘Hey everybody come here! This guy’s a racist! This guy hates brown people!’” said Victor, wearing a yarmulke on his head Wednesday instead of his MAGA hat.

Palo Alto resident Rebecca Mankey took to social media, posting in part, “I yelled at him about how it was not okay to hate brown people. I called him more names and told him to call the police. He wouldn’t call the police so I called him a wimp, yelling at him to get the [expletive] out of my town. I’m going to publicly shame him in town and try to get him fired.”

Victor stated that Mankey left the Starbucks, but came right back in “to rile the Starbucks crowd once more.”

Victor has a yarmulke under his hat so “being called a Nazi is hurtful.” He also said that Mankey “didn’t want to discuss the issues” and only “wanted to scream about” Nazis.

I know people will scream about First Amendment rights, but that only covers the federal government. While I believe you can say what you want, business owners have a right to fire people.

Should anyone be shocked? Not only are these confrontations disgusting, but its bad press for the employers. Mankey wanted people to harass Victor, but it turned on her and her employer:

In fact, the opposite happened. People started harassing Parker Mankey’s family and her employer Gryphon Stringed Instruments, where she was an accountant.

The store owner decided to fire her after he read her Facebook posts.

“We feel that music is what brings people together. So having someone then making comments that are so divisive is not consistent with our values,” said store owner Richard Johnston.

Johnston said the business’s phones rang off the hook on Tuesday “with inquiries, caustic comments, and threats in reaction to the social media posts.” Mankey’s actions disgusted him and went against the company’s values. He stated that “Gryphon was the equivalent of kind of a musical town square for the community. And we welcome people of all views.”

Share This Post
Like it? Vote it up!
00
Previous ArticleTrump's DHS Releases More than 17K Illegal Aliens into U.S. in 12 DaysNext ArticleWyden: Every Day the Public Doesn't Have the Mueller Report 'Is Indicative of a Cover-Up'
You May Also Like

Wyden: Every Day the Public Doesn't Have the Mueller Report 'Is Indicative of a Cover-Up'

On Thursday’s broadcast of CNN’s “OutFront,” Senator Ron Wyden (D-OR) stated that every day that passes without the public getting the Mueller report “is indicative of a cover-up.” Wyden said, “Erin, every day that goes by without the American people Source link Veterans In Defense Of Liberty - Vidol

President Trump's Department of Homeland Security (DHS) is continuing its mass release of border crossers and illegal aliens into the interior of the United States, most recently releasing more than 17,000 migrants in less than two weeks. Source link